Not to be confused with Carnival Night Zone.

Night Carnival (ナイトカーニバル, Naitokānibaru?) is a Zone in Sonic Rush. It is the fourth Zone for Sonic and the first Zone for Blaze. Like most other Zones in Sonic Rush, Night Carnival consists of two normal Acts and a separate Boss Act devoted to the local boss. It takes place in a neon-lit metropolis with a carnival taking place at the same time.

Though it shares most of its aspects with carnival-based levels in other Sonic games, Night Carnival is less modern and more fancy, its buildings classical and defined, the Zone more akin to a long lived city made over for a night festival. The Zone's main feature is centered around a large makeshift centerpiece skyway connected to the rooftops of the city, incorporating high flying gadgets with a variety of bright lights, including neon and marquee lighting. Several areas of both Acts also contain neon posters and billboards of both Sonic and Blaze.

Having learned from Vanilla that Blaze is currently with Cream and where to find them, Sonic and Tails head to Night Carnival to find Blaze and gets some answers about the current time-space crisis affecting their dimension. Arriving at the end of Night Carnival's Zone, Sonic encounters Eggman Nega in the Egg Libra. During the ensuing battle, Sonic manages to defeat Eggman Nega. Eggman Nega then leaves in his Egg Mobile, promising not to forget this. Sonic tells him to wait, but is ignored.

After arriving on Sonic's world, Blaze sets out to find the seven Sol Emeralds that were stolen by Dr. Eggman and brought to this place. Entering Night Carnival, Blaze fights her way to the end of the Zone, where she finds Dr. Eggman. Remembering seeing Blaze when he visited her world, Eggman tells her that he did not expect to see her in this world. With her suspicions confirmed that she is in another dimension, Blaze tells him to return the Sol Emeralds since a great danger will befall her world if they are not returned. Flaunting the purple Sol Emerald, Eggman says that they are his keps to ultimate power and tells Blaze to scat. Noticing that Eggman likes to "play with fire", Blaze engages Eggman in battle. Defeating Eggman, Blaze sends him flying in his Egg Mobile with a fiery kick, which causes Eggman to drop the red Sol Emerald. Grabbing the Sol Emerald, Blaze watches contently as Eggman flies into the distance.

In the aftermath, Blaze ponders about how she is going to find the other six Sol Emeralds since she is lost in another world when she notices someone hiding in the bushes. Those someone turn out to be Cream the Rabbit and Cheese, who are shyly trying to get closer to her and then talk to her. Telling Cream and Cheese to come out, Cream and Cheese present themselves with a bow and ask for Blaze's name. Perplexed by how friendly Cream is to a stranger without showing caution, a flustered Blaze tells her to back off when she gets close to her. Cream, however, is just glad that Blaze spoke to her, and, after hearing her name, decides to take Blaze to her house in spite of Blaze's reluctance. When they arrive, Blaze is just confused over Cream's friendliness towards a stranger. There, Blaze is introduced to Vanilla by Cream as a new friend of hers while she was out wandering around, much to Blaze's surprise. After Vanilla has greeted Blaze, the latter tries to take her leave, but Vanilla insists that she stays for tea first, confusing Blaze even more over the friendliness of this family.

After reluctantly agreeing to tea and having told Cream and Vanilla her tory, the rabbit family tells her that she should seek out Sonic for aid. Blaze, however, insists thtat this is her problem and that she will find the Sol Emeralds herself. Despite disagreeing with her standpoint, Vanilla offers to let Cream be her guide while she is in this world. Blaze initially declines, but Cream insists that, as her friend, she must help her. Seeing that she does need a guide, Blaze lets Cream have her way, and leaves with her, with Vanilla telling them to take care of themselves.

Night Carnival has only two acts per story mode, and both story mode Acts are identical.

In this Zone are some chargeable Springs that can launch the playable characters a great vertical distance when the characters crouches on them (the longer you crouch, the higher they go). However, there's a particular spring that does not launch the player high enough to reach a platform; said platform can only be reached by using the Hop Jump/Axel Tornado.

A primary feature seen throughout the zone are switches that are required to be used to activate platforms and even Grind Rails in order to progress to progress throughout the stage. The zone also includes a unique spring that can be charged by holding Down on

; the longer it is charged, the further the player will be launched from the spring when releasing Down.

When playing as Sonic, Special Generators appear throughout this Zone which can warp the player to the fourth Special Stage for a chance to collect the green Chaos Emerald. As Blaze, the red Sol Emerald can be found after defeating the boss.

The boss is Egg Libra, which is fought in a circle on a high platform in the middle of the city in which Night Carnival takes place. One end has Dr. Eggman's/Eggman Nega's cockpit on it, and the other end has an electrified sphere. The boss will try to zap the player with electricity beams and also crush the player by slamming the sphere into the ground to make shock-waves. It even sends out little droids that come after the player. It can be defeated by hitting the sphere when it isn't electrified. This causes a seesaw effect; when the sphere is knocked up, the Eggmen's cockpit goes down, leaving it vulnerable to an attack. The boss can also be damaged by jumping on the little droids, which launch the player up in the air so that they can hit their foe without knocking them down. 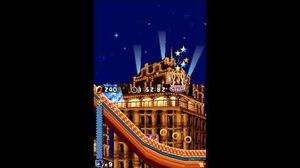 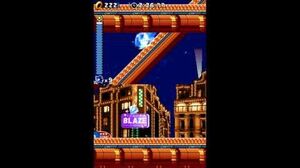 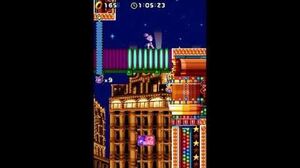 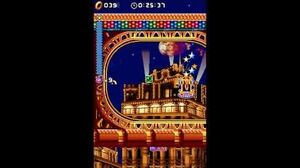