"King Acorn" redirects here. For the version of this character before the Super Genesis Wave, see Maximillian Acorn.

I'm not going anywhere. I will handle the matters of state here. You will stay with the Freedom Fighters and protect the world.

King Nigel Acorn[2] is a character in the Sonic the Hedgehog comic series and its spin-offs published by Archie Comics. He is a Mobian squirrel, the king of the Kingdom of Acorn, and the father of Princess Sally Acorn. Many years ago the king was betrayed by his former royal advisor, Dr. Robotnik which would result in the evil scientist's rise to power, while the King was imprisoned in the Special Zone. Thanks to Sonic the Hedgehog though, the King was rescued and restored to his throne, where he promised his daughter that that he would handle the matter of state so she could continue as a Freedom Fighter.

Nigel is a Mobian brown squirrel with blue eyes. He shares general coloration with his daughter; such as two tones of brown used for his fur, and auburn hair and eyebrows. He particularly has a short and smooth mustache and likewise smooth and flat hair, and possesses a large and rounded, bushy tail. He has no cheek fur however.

Nigel typically wears a blue-colored uniform trimmed with red at the collar, sleeves, and bottom, with a red belt with an acorn-shaped buckle and gold epaulets. He also wears white gloves, and blue boots with buckles on the feet and red cuffs on top.

King Acorn was an affectionate father to his daughter Sally and a just ruler of the Kingdom of Acorn.[3] At some time in the past, one of his royal advisors, the scientist Dr. Ellidy, retired from King Acorn's service. The king bid his old friend farewell as he was leaving, and later watched as Sally said her goodbyes as well. Ellidy presented Sally with the parting gift of a handheld computer, and was stymied when the princess asked what "her" name was. Seeing his friend struggling, the king suggested naming it after a past queen-Nicole-and the name Nicole was happily accepted by Sally.[4]

Some time after, Nigel made the mistake of trusting both Walter Naugus and Dr. Eggman as royal advisors. After earning his trust, the two villains and Dr. Julian Snively attempted to convince the King that the infamous United Federation sought to invade his kingdom, which worked as the two nations had a questionable history in the past.[1][3][5] Eggman's schemes eventually succeeded, and he imprisoned both King Acorn and Naugus in the Special Zone, taking over Mobotropolis in their absence.[3][5] Some time later, King Acorn would be rescued by the Freedom Fighters, lead by Sally and Mobotropolis was restored to its former glory. However, Sally came to enjoy her new lifestyle as a hero and appealed to her father to let her stay that way. King Acorn stopped her and admitted that it would work out for the best, as her actions honored her Kingdom and that while he would always worry for Sally's safety, it made sense for her to be out on the field, protecting the world from Eggman, while he handled things back in Mobotropolis.[3]

Note: From the readers point of view, this picks up from where Nigel Acorn's original history ended.

At some point, Nigel had run afoul of Naugus and was eventually captured by the wizard as he attempted to take the throne, and imprisoned under Castle Acorn. He was eventually rescued from his captivity by Sonic, Tails, and Nicole, the latter of whom he felt had been captured by Naugus due to his own hesitation. Sonic and Tails, who both had their memories distorted by the recent Super Genesis Wave, filled him in on events. Sonic was taken aback by the King's positive health and demeanor, a stark contrast to how he appeared in their distorted memories. Informing the pair that the Freedom Fighters had been working on a classified project, he showed them a single message sent by Rotor, which included a set of encrypted coordinates. As the heroes prepared to leave to find their missing friends, Nigel made one request: that they let him know as soon as they found Sally.[6] He was later reunited with his daughter after her return from scouting the Death Egg.[7]

The Shattered World Crisis soon forced the reunited family apart again, but Westside Island was fortunate enough to be spared the worst of the planet cracking apart. Nigel and Vanilla the Rabbit later contacted the Freedom Fighters aboard the Sky Patrol to trade notes on the current situation. Despite the difficulties, Nigel remained optimistic and confident in the abilities of the young heroes.[8] However, he was later approached by a somewhat embarrassed Sally with perturbing requests for use of the Kingdom's treasury for use in their efforts to acquire the Chaos Emeralds.[9]

The next time the pair had contact, Nigel sent a distress call out to his daughter when Mobotropolis came under attack by one of the new Roboticized Masters, M'egga Man.[10] This event was later erased from the timeline by a time paradox.[11]

Later, Nigel was visited by Cream the Rabbit, Big the Cat and Gemerl and was given custody of the Chaos Emeralds and Gaia Keys until it was time to enact Sally's plan to restore the planet.[12] Soon after, he was visited by both Team Dark and Knuckles the Echidna alongside Amy Rose, with each group asking for permission to search the Kingdom of Acorn for the Dark Arms and Master Emerald shards respectively. He gave them all his blessing, but made his displeasure of being informed of the Dark Arms' return so late and his worries that G.U.N. might be turning back to their old ways clear, prompting a nervous Rouge the Bat to promise to let her superiors know about his concerns. Nigel then appoints Amy to act as the crown's liaison during the missions.[1] Sometime later, Mobotropolis came under attack by Eggman's forces who've come to steal the emeralds and keys needed to fix the world. The Hooligans managed to make their way to the royal vault where they found Nigel waiting for them. Activating the bracelets on his wrists, he branched his sword and shield and proceeded to attack the intruders. Although Nigel knocked away both Bean the Dynamite and Nack the Weasel with ease, he was rendered unconscious by Bark in a single blow.[2]

Later, after the Shattered World Crisis had ended, Nigel, Sonic, Sally, Amy and Cream had a tea party in Castle Acorn's gardens.[13]

Nigel is considerate and has a jovial demeanor, and he displays quite friendly regards towards Sonic, Tails, and Nicole. He is a beloved family man and hold a great deal of fatherly concern for Sally, though he also expresses confidence in her abilities and understands her important contributions to the Freedom Fighters. As such, he allowed Sally to remain with the Freedom Fighters even after Mobotropolis had been reclaimed from Dr. Eggman. He can also be surprisingly serious at times, as when he believed that G.U.N. was withholding information from him his demeanor became so grave and somber it caught Rouge off guard.

Much like Sally, Nigel wears a pair of bracelets which lets him generate a sword and shield made of solid energy for combat.[2]

Concept sketches, from Sonic the Hedgehog Volume 2: The Chase. 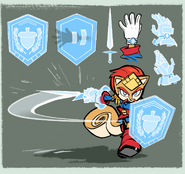 Concept art of Nigel Acorn's weapons.
Add a photo to this gallery

Retrieved from "https://sonic.fandom.com/wiki/Nigel_Acorn?oldid=2170493"
Community content is available under CC-BY-SA unless otherwise noted.