I'm a hedgehog, I'm not very good at fighting. But my dream is to one day be as strong as my dad.

Nicky (ニッキ, Nikki?) is the main character of the Sonic the Hedgehog serialized manga published by Shogakukan. He is a fourth grade student at Hedgehog Elementary School. Nicky is a sweet and even-tempered hedgehog of the Hedgehog Town, and the alter-ego of the heroic Sonic the Hedgehog. Nobody (except Tails) is aware of his alter-ego which tends to transform into.

In the Shogaku Ninensei stories, prior his first transformation, Nicky is anthropomorphic hedgehog with brown fur and light brown hair.[2] After the transformation though, his fur and hair became permanently light blue.[3] He also wears wide glasses without temple measurements, a red shirt with an "N" printed on it, and blue and white shoes.

In the CoroCoro Comics Special stories, Nicky is seen having similar head quills compared to Sonic's and a small fringe above his head. He is wearing black glasses without temple measurements and white gloves like other characters.

Nicky's biggest dream is to defeat the forces of evil and be regarded as a hero; unfortunately he is weak and somewhat of a coward. Even if the people near him believe in him, he does not have the nerve to take action, which is why he is often bullied by Anton Veruca. Nicky loves to spend time with his girlfriend Amy and his friends. Even though Nicky does not have the strength to save the day, he will transform into his alter-ego Sonic when his help is needed. 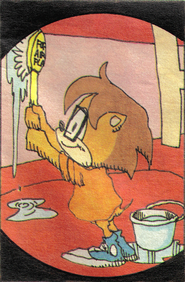 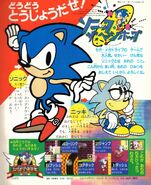 Retrieved from "https://sonic.fandom.com/wiki/Nicky?oldid=2259713"
Community content is available under CC-BY-SA unless otherwise noted.