Next (ネクスト, Nekusuto?) is minor character that appears in the anime series Sonic X. They are a purple furry mascot who hosts a children's television show, the Next Show, watched by Cream and Cheese occasionally.

While mostly seen pictured on a TV in several episodes, they appear in the episode Prize Fights, where they are seen holding a sign with the number 2, indicating that it is the second round of the Chaos Emerald Martial Arts Mash-Up. 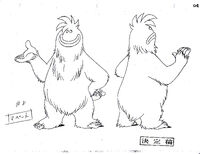