A frozen plant filled with machinery and dangerous chemicals.

We have to capture the Chemical Plant. If anyone tries to stop you, take them out!

Network Terminal (ネットワークターミナル, Nettowākutāminaru?) is the twenty-first stage in Sonic Forces, and the seventh stage in the game to be played as Sonic. This stage is a re-imagining of Chemical Plant Zone from Sonic the Hedgehog 2 on the Sega Mega Drive.

One of Dr. Eggman's many chemical plants, the Network Terminal is an industrial high-tech maze in the frigid north of Sonic's world. During the events of the game, Sonic infiltrated this facility in order to shut down the Death Egg's defenses from a local computer room.

Like its other incarnations, Network Terminal is an industrial area with no natural environments. Unlike earlier versions of Chemical Plant however, it is presented in a maritime zone, as a kind of industrial platform.

The outside of Network Terminal consists of giant metallic structures that rise up from the sea. These structures include cylinders in orange and yellow, a truly massive plaform overshadowing the clouded sky, industrial cranes, and blocky high-tech factory-based chemical plants. Similar structures (including spherical chemical tanks) can also be seen lining the horizon. There are also pipes on the larger structures, and there are interwoven yellow pipelines with blue chemicals flowing through them that Sonic uses as roads.

Due to being located in the northern region of Sonic's world, most of the outside of Network Terminal has frozen over. Surfaces of ice fill up the bases, the buildings are covered in a thin layer of frost, and the air is chilly with falling snow.

The interior of Network Terminal is a metallic nightmare of a facility that stretches as far as the eye can see into the background. Here, pipes in all sizes run all over the place. Spherical containers for chemicals also appear in various spots, and everything is lit up by orange-red lights. There are as well glass tubes that serve as passages between the different sections. Mega Mack also occasionally leak from above. In the foreground, the routes, which are plated with yellow-colored metal along the edges, move between the various structures. Finally, at the end of the interior is a well-lit and highly advanced computer room.

After a successful diversionary action at Guardian Rock by the Avatar that has left Network Terminal unguarded, Sonic moves in to take the Chemical Plant on behalf of the Resistance and also shut down the defenses guarding the Death Egg. Knuckles himself leads Sonic in the direction of the computer room, where he can shut down the defensive systems around the Death Egg. In typical Sonic-fashion, Sonic manages to enjoy his death-defying mission, and eventually finds the computer room in the depths of the Chemical Plant. Once that is accomplished, the Resistance is able to reclaim the Chemical Plant from the Eggman Empire and prepare to assault the Death Egg with Classic Sonic's support.

The outside section of the Network Terminal primarily features Grind Rails that the player must jump between to reach different paths. Additionally, a couple of crane-like Zip Lines appear in this section that the player can use in order to reach other areas.

Inside the Network Terminal, slews of Mega Mack will fall from the ceiling at certain spots at intervals, usually forewarned by several trickles forewarning when it will come down with a corresponding splattering sound. If Sonic gets caught by the Mega Mack, he will be immobilized on the spot or pushed down, possibly even into a Bottomless pit. In some cases, the Mega Mack will push down rotating platforms, thereby allowing Sonic to ride said platforms to different areas. The inside of the Network Terminal also has high-speed warp tubes that can take the player to different areas. Sometimes, to enter the high-speed warp tubes, the player will need to destroy a metal lid. These tubes' exits will also seal themselves up with a Spring after the player passes through them (to prevent backtracking).

Being a Sonic stage, Network Terminal has numerous Wisp Capsules filled exclusively with White Wisps along the way for the player to charge their Boost Gauge with.

At the beginning of the stage, Sonic runs across three yellow pipelines with blue chemicals. After this section, there will be a gap that the player can cross by jumping or by using the Grind Rails on the sides of the path (the Grind Rail on the left will clamp the road). After reaching the end of the path on the other side of the gap, the player will be launched to another Grind Rail by a Spring. By following this rail, the player will enter a network of Grind Rails and Zip Lines. It is worth noting that in the middle of this network are a set of three runnable pipes that the player has to cross in order to reenter the network. 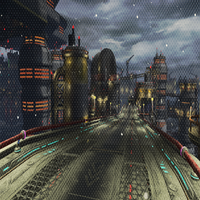 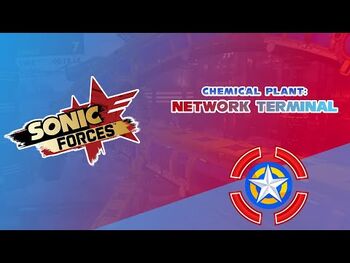