Neon Palace Zone is the third Zone in Sonic Rivals 2. The latest in a long line of brightly colored casino metropolis, the Zone contains three Acts plus a boss fight at the end.

Incorporating both the pinball-flipper slot machines of Casino Night Zone from Sonic the Hedgehog 2 and the bingo-squares of BINGO Highway from Sonic Heroes (activated by running over numbered blocks to form the appropriate ring-earning lines), Neon Palace plays the gambling cliché straight up. The background features playing card motifs, and the floor is often decorated with red/white dice-patterned tiles.

Sonic and Tails chase Eggman to the city and loose him. Tails finds another page from Eggman's journal, reading "The Ifrit held the power of destruction and the power to 'bind one's soul...". they bump into Shadow and Metal Sonic. Sonic and Tails both race to intercept the former's dark counterpart and robotic counterpart respectively.

Testing out their new Emerald Detector, the two treasure hunters discovered that the detector is beeping at a Chao. Knuckles proceeds to collect Rings to fuel the Emerald detector and later on meets Silver who is crazy enough to believe that finding Chao could possibly save the world. Meanwhile Espio meets up with Rouge with the Emerald detector. Only a Chao was detected but it turned out that the Chao was sitting on a Chaos Emerald. Espio snatches both the Chao and the emerald leaving Rouge to pursue him.

Shadow the Hedgehog and Metal Sonic

Shadow receives an order from the real Eggman that his Badniks are under Eggman Nega's control and are destroying the real doctor's base. Shadow proceeds to destroying them. The ultimate life-form is then intercepted by his heroic counterpart in which the former knocks out the latter. Metal Sonic in the meantime is ordered to take care of Tails.

With Silver finally gaining the trust of Espio and deciding to work together, the duo encounter Knuckles and Rouge. In Silver's case he proceeds to collect the Chao only to have Knuckles thinking that Silver is crazy for thinking that the Chao can help save the world while Espio snatches a Chao and the Chaos Emerald from Rouge after she found something with the Emerald detector. 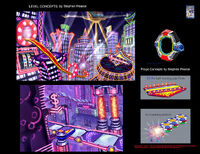