The Zone is visually similar to Green Hill Zone, but the actual level layout is a condensed version of Emerald Hill Zone with more loops.

Neo South Island Zone Act 1 begins with a large open area with some Badniks and a Super Rings item box. A small ramp slows Sonic down just before the first waterfall is reached. From here, multiple paths emerge. The lower of them leads below the previous waterfall and to many secrets, while the upper route leads towards multiple loops and a ramp that sends Sonic flying into the air. The act condenses around the first Start Post, before becoming just two relatively parallel paths. Still, many springs connect the areas together.

By crossing the floating platforms over the first Start Post, two corkscrews will be found. If the second is gone through without slowing down, Sonic will be sent flying backwards by a red diagonal spring placed right at the end of the path. If the player instead crosses under the previous path, they are met with more loops, waterfalls, and Badniks before connecting with the upper path to reach the goal plate and completing the Act.

Neo South Island Zone Act 2 is substantially shorter than Act 1, but it follows the same general format. The Act opens with more dangers than the last, as both a Coconuts and some Mashers are right in front of Sonic when he arrives. The path is also littered with spikes, so the player must be carful, as there are many ramps that can send them falling to their doom. After two loops, the path splits into multiple different routes yet again. By continuing straight forward, the player will come across a massive vertical tunnel.

There are many different pathways that lead to the end, and the player can splice them together by using tunnels, loops, and springs. After a corkscrew through the air, the final Start Post is passed and the boss fight will ensue. Once the boss is defeated, the player can open the nearby capsule and complete the Act.

The boss of Neo South Island Zone is Dr. Robotnik in a vehicle armed with a giant mallet. In the boss battle, Robotnik rolls back and forth along the ground, pounding the earth with his mallet. After taking four hits, Robotnik will pause when he reaches the middle of the arena to slam the ground with the hammer, creating a shockwave that will inflict damage if Sonic is standing on the ground. After hitting him four more times, Robotnik's vehicle will begin to explode before he takes off in his Egg Mobile. 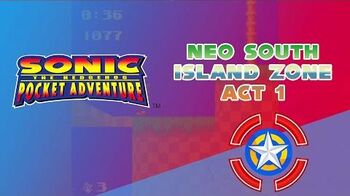 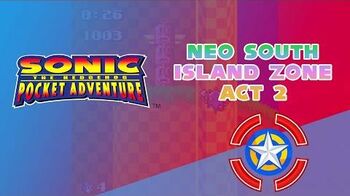