All living things kneel before your master!

Neo Metal Sonic[1] (ネオメタルソニック, Neo Metaru Sonikku?) is a transformation that appears in the Sonic the Hedgehog series. He is one of Metal Sonic's transformations which he once used to disguise himself as Dr. Eggman and copy the data of those he fought against in order to make himself more powerful.

Neo Metal Sonic shares some distinctive traits with his base form, such as black eyes with red irises, a similar torso with a rocket engine in the center, and the primary blue color with red shoes. There are a number of differences that Neo Metal Sonic features as well. His head has five long quills as opposed to his regular three, with white stripes and markings around his eyes, similar to that of Shadow the Hedgehog. The yellow color in his ears has been replaced with red and his once grey nose is now black.

He also possesses more pronounced body armor, with black and curved shoulder plates, larger gauntlets and leg armor with pointy kneecaps that have white outlines, a plate covering his pelvis and elf-like shoes. He also sports a spiky belt with a black cape that protrudes out of the back of his waist.

Prior to Sonic Heroes, Metal Sonic assumed this form as he sought to defeat Sonic on his own and conquer the world himself, as he held the "key to destroy the world."[2] To this end, he betrayed Dr. Eggman, took control of the Eggman Empire and began seeking out the data needed for him to transform into Metal Overlord. To achieve this, Neo Metal Sonic needed to copy the lifeform data of other beings. Using his shapeshifting abilities to pass as the real Sonic, Neo Metal Sonic would also kidnap Froggy and Chocola in order to obtain their data on Chaos as well.

When Team Sonic, Team Rose, Team Dark, and Team Chaotix began their adventures, Neo Metal Sonic would cross paths with the groups on various occasions in the guise of Dr. Eggman and get the lifeform data he needed from them. By the time Team Dark and Team Sonic defeated the Egg Albatross, Neo Metal Sonic had successfully copied Shadow's data and that of all the teams, and when Team Rose defeated Neo Metal Sonic in the Egg Emperor, he had copied Chaos' data as well, making him release Froggy and Chocola from captivity.

With all the data he needed, Neo Metal Sonic revealed himself to the heroes and destroyed the Final Fortress' tower before using the debris to transform into Metal Madness, and later Metal Overlord. However, he was later defeated by Team Sonic and reverted to Neo Metal Sonic, and then back to his original form with Sonic promising him a rematch at any time.

Neo Metal Sonic is, like his normal form, able to scan the life data of other life forms, allowing him to copy and replicate others' attributes and abilities flawlessly. Due to his actions throughout Sonic Heroes, it can be assumed that he possessed the abilities of all the teams, plus those of Chaos itself, at the climax of the story.

Neo Metal Sonic has the power to shapeshift, allowing him to change his appearance and body structure. When shapeshifting, he turns into a puddle of liquid metal and then emerges in a new form. This allows him not only to perfectly imitate the appearance of organic creatures, but also the appearance of robots as well, such as fake Dr. Eggman robot copies, though Tails could tell it was not an Eggman robot. He can also safely contain creatures such as Froggy and Chocola inside of himself until he had copied Chaos' data.

As demonstrated when he first revealed himself to the heroes, Neo Metal Sonic can create lightning bolts from his hands, launch them into the sky and then bring it back down with enough power to blow up the Final Fortress' largest tower. He can also manipulate outside elements through unknown means to rebuild himself, such as when he used the debris from the Final Fortress' tower to rebuild himself into Metal Madness.

By combining the data from Team Sonic, Team Dark, Team Rose and Team Chaotix with the data from Chaos, Neo Metal Sonic is able to rebuild himself into a much stronger form called Metal Madness. In this form, Neo Metal Sonic's strength and power are highly increased, and he gains new abilities and weaponry, such as launching the spines on his back which will sprout into a sharp spike formation, a large flamethrower, missiles which can trap his enemies in crystal cages, and a powerful sweep with his tail.

After completing his transformation as Metal Madness, Metal Madness grows a pair of mechanical wings on his lower body, becoming Metal Overlord. In this form, Metal Overlord is nearly invulnerable and is powerful enough to fight on par with Super Sonic, Super Knuckles and Super Tails. He is capable of flight and is strong enough to throw entire battleships. As Metal Overlord, he can fire a barrage of crystal pillars from his torso, launch the spikes on his back as homing missiles, fire crystal encaging missiles, and perform Chaos Control.

In the Sonic the Hedgehog comic series and its spin-offs published by Archie Comics, an army of Neo Metal Sonic robots, called the Metal Sonic Troops, appeared. These robots were created by Sir Charles Hedgehog and Rotor to serve as protectors of Knothole after Sonic was lost in the battle with the Xorda. While they were never activated by their creators, when Sonic returned, A.D.A.M. managed to assume control of them and send them on a rampage against Knothole and Dr. Eggman. The entire army was destroyed however, when Shadow the Hedgehog used Chaos Control.

After the Super Genesis Wave, just like in the games, Neo Metal Sonic was an alternate form of Metal Sonic, assumed after usurping control of the Eggman Empire from its creator.

In the Sonic the Hedgehog comic series and its spin-offs published by IDW Publishing, Neo Metal Sonic is a transformation of Metal Sonic. His past is virtually identical to his game counterpart's, up until after the events of Sonic Forces. During the last days of the Eggman War, Metal Sonic was given this form by Dr. Eggman so he could be used as Eggman's final weapon against Sonic. However, he was completed too late and found the Empire Eggman in ruins when he emerged and Eggman missing. To ensure Eggman's rule remained unbroken, Neo Metal Sonic took the form of Eggman and re-organized his army of Badniks in order to find his missing creator. He soon met Sonic though and copied his bio-data, and later led the Egg Fleet into a conquest of Angel Island. During the battle for the island, Neo Metal Sonic transformed into Super Neo Metal Sonic thanks to the power of the Master Emerald. He later copied the data of Shadow as well, and combined it with the power of the Master Emerald, to transform into Master Overlord. However, he was soon defeated and restored to his original form.

"It's no use... but why can't I defeat you?"
—Neo Metal Sonic's final words, Sonic Heroes 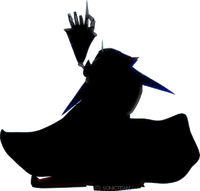