A coastal area with beaches and a blue ocean.

Neo Green Hill Zone (ネオグリーンヒルゾーン, Neogurīnhiruzōn?) is the first Zone in Sonic Advance. It is a green area near a beach in daytime. Like other Zones in the game, Neo Green Hill Zone consists of two Acts, with a boss at the end of the second.

Neo Green Hill Zone consists in a fairly standard green field near a series of beaches and an ocean during daytime. Some vegetation and forestry is found in the Zone as well. A large, red bridge is also located somewhere in the Zone.

Act 1 features a large number of simple gimmicks and environmental objects, such as Springs, Spring Poles and loops.

Neo Green Hill Zone's Act 1 can be explored fully by any of the characters. Near the end of the Act, a Special Spring can be seen on a floating platform. To reach it, the player has to take a vertical ramp and use a set of floating, moving platforms.

Act 2 is similar to Act 1. However, more vegetation and forestry can be seen. At the end of the Act, the player arrives on a suspension bridge where they will spot Dr. Eggman, who turns around and flees in his Egg Mobile. He then approaches the player in the Egg Hammer Tank. After defeating the vehicle, Eggman will flee, dropping a capsule with Animals trapped inside in the process. Open the capsule to complete the Act.

The boss of Neo Green Hill Zone is the Egg Hammer Tank, which is encountered at the end of Neo Green Hill Zone Act 2. This boss attacks by rolling along the arena, swinging a giant hammer through the air and into the ground. After sustaining a number of hits, the machine picks up speed and the hammer itself becomes the axis while the cockpit swings precariously through the air. Hit it a total of eight times on Normal mode, or six on Easy mode, to defeat it.

In Sonic Pinball Party, Neo Green Hill Zone appears as one of the levels on the Sonic board. 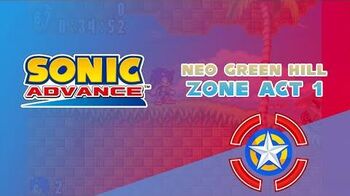 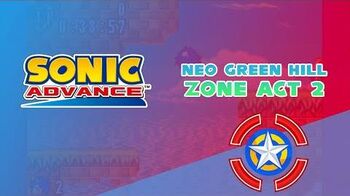 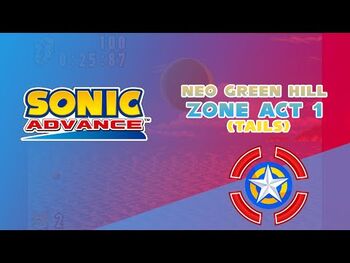 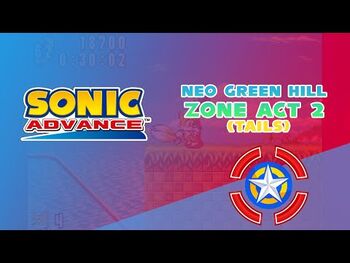 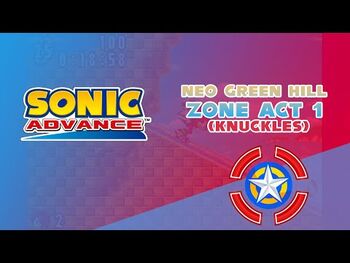 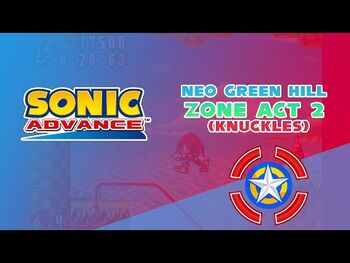