The Nega-Mother Wisp, from the Nintendo DS version of Sonic Colors.

The Nega-Mother Wisp[1] (ダーク・マザーウィスプ[2], Dāku Mazā Wisupu?, lit. "Dark Mother Wisp") is a transformation that appears in the Sonic the Hedgehog series. She is Mother Wisp, mutated into a massive and powerful Nega-Wisp. Forced into this form by Dr. Eggman, she became an uncontrollable monster and escaped Eggman's captivity before going on a rampage until she was stopped and returned to normal by Super Sonic.

Just like her original form, the Nega-Mother Wisp is several times larger than the average Wisp, approaching that of eight meters and has a much sinister overall appearance, a trait shared by the Nega-Wisps.

The Nega-Mother Wisp has a head shaped almost like a garlic bulb which lacks any eyes, but instead has a wide mouth with sharp teeth. On both sides of her head she has a curved horn, and on top of it, she has a flower-like appendage with pink petals, an eye-like gynoecium and hair-like funguses around its root.

Extending from around the bottom of her head, the Nega-Mother Wisp has three layers of a fringed, leaf-like violet collar, with several ragged and cloth-like purple tentacles stemming from the bottom of her head. She also possesses two larger and much more ragged tentacles with appendages resembling heads with large sharp jaws and several pink eyes, on the end of them.

In the Nintendo DS version of Sonic Colors, the Mother Wisp was forcefully transformed into the Nega-Mother Wisp when Dr. Eggman captured her and syphoned her of her Hyper-go-on energy. While Eggman deemed the project a success and secured a massive amount of Hyper-go-on from her, the Nega-Mother Wisp's mutation had reduced her mindset to that of a wild and uncontrollable monster, leaving her beyond Eggman's control. She eventually escaped Eggman's captivity and remained in hiding for an unpresented amount of time.

The Nega-Mother Wisp possesses a high superhuman strength, enough to knock away a person in a Super State, and even release a concentrated shockwave in the wake of her movements with similar effects through sheer force. The Nega-Mother Wisps also has large amounts of physical endurance, being able to withstand a series of strikes with the Super Sonic Boost and being hit with meteors, and shows additionally a remarkably fast recovery rate after being disabled.

Nega-Mother Wisp is the secret final boss in the Nintendo DS version of Sonic Colors. She is unlocked by collecting all seven Chaos Emeralds in the game and can be encountered after defeating the Nega-Wisp Armor.

In the first phase of the boss, Sonic appears on the lower screen and has to avoid balls of energy fired from Mother Wisp's mouth which slow him down significantly. Mother Wisp then unleashes several energy-based swiping attacks with her tentacles, which Sonic must avoid. The purple balls of energy are a hindrance here, as they slow Sonic's dodges. Meanwhile, Sonic must Boost into the asteroids that are floating around nearby and hit them at Mother Wisp. If they hit one of Mother Wisp's hands, she will be damaged.

After Super Sonic does this twice, the second phase will start. Sonic begins to Boost toward Mother Wisp at full speed, and he must avoid the purple and red energy balls that Mother Wisp spits. The red ones knock Sonic back, and the purple ones slow him down as before. He must also dodge a giant eye-beam that the Mother Wisp fires. Once Sonic gets close enough, he gets one chance to Boost into Mother Wisp's eye. If he misses, he must start over from the beginning of Phase 1. If he hits his target, Mother Wisp will be severely damaged and two of the petals surrounding her eye will be knocked off. Sonic must do this three times in total (six petals) to defeat Mother Wisp. The screen doesn't tell the player how many times he has hit Mother Wisp directly, but they can find out based of the number of petals remaining. 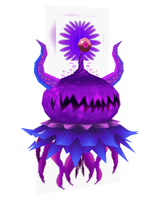 Nega-Mother Wisp without her arms