A Needlenose, from Sonic the Comic #131. Art by Richard Elson.

The Needlenose is a character that appears in the Sonic the Comic series published by Fleetway Editions. It is a mosquito-based Badnik variant created by Dr. Ivo Robotnik. It is described as one of Robotnik's more advanced Badnik models.[1]

Upon Robotnik's localization of the Hidden Zone, some Needlenoses were assembled for a Badnik army to invade the secluded Zone. Upon arriving though, they were destroyed by Sonic the Hedgehog.[2]

A number of unique Needlenoses stationed in the Palmtree Panic Zone later met B.A.R.F. who had come upon ordered to bring them and the local Badniks to the Green Hill Zone. Despite being against it, the Needlenoses and the Badniks complied to the relocation. When they arrived though, they refused to share a Zone with the local outdated Badniks, so they began wiping them out. However, the Needlenoses and their fellow Badniks were brought back in line by a group of super-Badniks, dubbed the Seven Badniks. B.A.R.F. then took them back to Palmtree Panic Zone to attack Freedom Fighters, only to be destroyed swiftly.[1][3][4][5]

Years later, several Needlenoses joined hordes of Badniks in an successfully ambush of the Freedom Fighter under Agent X's directions.[6]

The Needlenose by Carl Flint. 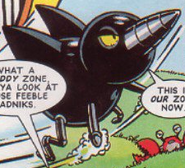 The Needlenose by Mike Hadley and John M. Burns.
Add a photo to this gallery

Retrieved from "https://sonic.fandom.com/wiki/Needlenose_(Sonic_the_Comic)?oldid=1732671"
Community content is available under CC-BY-SA unless otherwise noted.