NKOK Inc., established in 1998, is a company that distributes US licensed products, specializing in remote-controlled toys. They released a line of remote-controlled cars based on Sonic & Sega All-Stars Racing a few months after the game was released. Since then, NKOK has released multiple lines of Sonic the Hedgehog Toys, based on racing games. 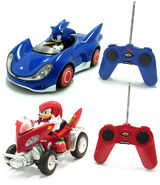 Sonic and Knuckles
Add a photo to this gallery

NKOK released a line of remote-controlled racers in promotion of Sonic Free Riders, so far two racers have been released.

A Sonic R/C racer with lights based on Sonic & All-Stars Racing Transformed  was released, as well as several pullback racers.

To promote another Sonic racing game, Team Sonic Racing, NKOK produced remote controlled cars. The toys released were Sonic in the Speed Star and Shadow in the Dark Reaper, both marketed "with turbo boost". 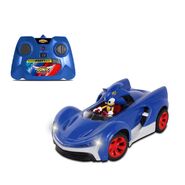 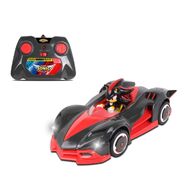 Shadow the Hedgehog
Add a photo to this gallery

A pull-back racer of Sonic in the Sonic & Sega All-Stars Racing design of the Speed Star was released in 2019, in generic Sonic series packaging.