Take thisss, our Gemmm of Power. Use it to destroy Lord Ixxx. He will pay for his liesss...

The N'rrgal Queen (ナーガル女王, Nāgaru Joō?) is the leader of the N'rrgal, one of the Twilight Cage races encountered by Sonic and friends during the second act of Sonic Chronicles: The Dark Brotherhood. She exists as the combined form of several N'rrgal, and carries the shared minds of her entire race.

During Chapter 8 of Sonic Chronicles, the N'rrgal Queen compels Sonic and his friends to travel to the Zoah Colony and sabotage the Zoah's superweapon. She later appears at the Twilight Conference on the Kron Colony, and agrees to assist in the assault on the Nocturne.

The N'rrgal Queen is able to manifest from several N'rrgals fusing into one gestalt entity, much in the Nrrgal Drones can combine together to form Nrrgal Warriors. Due to the nature of her creation, the N'rrgal Queen is highly intelligent and can utilize the knowledge of all her constituent drones.

As an N'rrgal, the N'rrgal Queen is an energy eater. She is able to absorb energy from machines and life force from her opponents which serves as her main defense.

In the Sonic the Hedgehog comic series and its spin-offs published by Archie Comics, the N'rrgal Queen is a N'rrgal and the leader of the N'rrgal inside the Twilight Cage. 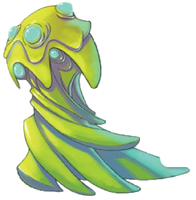 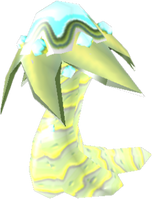