Sonic on the N'rrgal Colony

A disgusting and gassy swamp world infested with slug like beings

The N'rrgal Colony (ナーガルコロニー, Nāgarukoronī?) is the ninth area that appears in Sonic Chronicles: The Dark Brotherhood, and as well the second area encountered in the Twilight Cage. It first appears in Chapter 8.

The N'rrgal Colony is a massive, sickly green worldlet of a planetoid. The surface of the N'rrgal Colony is a colossal rock-like swamp area. It has ravines filled with green ooze that which cuts and winds directly through surface. Beside the ravines, the landscape is mainly composed of white plateaus at different highs, with luminescent orbs, that discharges energy, embedded into the cliffside. The passages through the N'rrgal Colony make up a viridian labyrinth of different paths, each which has a bioelectric field blocking any advances, except for N'rrgal or those who has physical endurance enough to pass through, such as Big the Cat. The flora that can be found on the N'rrgal Colony include orange grass, purple flower-like bushes and spherical-rooted trees.

Unlike the other colonies in the Twilight Cage, the N'rrgal Colony does not feature any kind of settlements for the N'rrgal.

During the events of Sonic Chronicles: The Dark Brotherhood, after the leader of the Nocturnus Clan, Pir'Oth Ix stole the seven Chaos Emeralds and the Master Emerald from Earth, the N'rrgal learned that the Zoah had acquired a new secret weapon that could destroy the N'rrgal race and allow them to conquer the N'rrgal Colony once and for all. Around this time, however, Pir'Oth Ix gave a Chaos Emerald to the N'rrgal Colony to the alien race the means to defend themselves and to destroy the Zoah if the need arose. In gratitude for this apparently benevolent act, the N'rrgal allied themselves with the Nocturnus Clan.

At some point after that, Sonic the Hedgehog and his team arrived at the N'rrgal Colony in an attempt to keep the Nocturnus Clan from taking over their world, by taking back the emeralds they had stolen. At first, the N'rrgal mistook them for spies send by the Zoah and the N'rrgal Drones drained their spaceship, the Cyclone, of energy, trapping them on the N'rrgal Colony. When they realized it was Sonic, however, the N'rrgal had Sonic and his team meet up with the N'rrgal Queen, as they had been told by Pir'Oth Ix that Sonic was public enemy number one. After Sonic and his made it to their audience with the N'rrgal Queen, the queen gave the team a proposition: go to the Zoah Colony and take away the Zoah's secret weapon, and the N'rrgal would give them back their freedom and their Chaos Emerald, as without the Zoah's weapon, they had no need for it anymore. Refuse, and they would be trapped on the N'rrgal Colony as their prisoners. 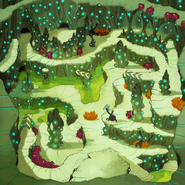 Full view of the N'rrgal Colony 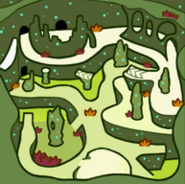 Add a photo to this gallery
Retrieved from "https://sonic.fandom.com/wiki/N%27rrgal_Colony?oldid=850399"
Community content is available under CC-BY-SA unless otherwise noted.