Sonic in the Mystic Ruins.

The epicenter of Perfect Chaos' attack millennia ago, the Mystic Ruins is all that is left of the Knuckles Clan civilization. In present-day, Angel Island once crashed on the shoreline next to Mystic Ruins; but it floated away again after the Master Emerald was restored. Sonic the Hedgehog and co. also made several trips through this area to halt Chaos' return to power.

Like the other Adventure Fields in Sonic Adventure, the Mystic Ruins is comprised of a number of distinct areas and a Chao Garden.

The Mystic Ruins Station Area[3] (or just Station Area[1] for short) is a large grassy plateau with some buildings and trees. One side leads to a steep cliff into the ocean, and on the other side is a mountain with various caves. A hill is located in the eastern part.

The southwestern corner of the Station Area contains the Mystic Ruins Station[2]/station,[3] a tall wooden building built to serve the archaeological sites, with stairs that lead to a stone bridge where the player can take a train to Station Square. Northeast of there is Windy Cave[3] which contains Windy Valley.[2] Other areas accessible from here are Angel Island/Mystic Ruins Angel Island through West Cave,[3] the Jungle/Mystic Ruins Jungle Area by the means of the Jungle-Bound Trolley Car[2]/Truck,[3] and the East Cave[3] which holds the Chao Garden Bound Trolley Car[2]/Truck[3] to the Mystic Ruins Garden and the Eastern Cave.[2] In Eastern Cave lies another doorway leading to the Shovel Claws and the Monkey Detonation Switch.

Other points of interest are the Boat Dock,[2] a platform below the station, accessed by a ladder, which eventually allows passage to the crashed Egg Carrier in the Sea,[2] and Tails' Workshop[2]/Tails's Work Shop,[3] a small two-story house on a hill. The latter has a long biplane runway with two rows of palm trees leading out into the ocean. The workshop is apparently connected to a cave beneath the house, where Tails works on his Tornado 2. Up north is the Waterfall[3] that feeds a small lake beneath it, which is then drained by a river leading into the ocean. A silver Chao Egg can be found on a ledge in the Waterfall. To obtain this egg, a switch near the Waterfall's base must be pushed. This retracts the ledge and drops the egg into the pool.

Mystic Ruins Angel Island[5] (or just Angel Island[1] for short) lies within the borders of Angel Island. After Angel Island crashes near Mystic Ruins, most characters can access this area through the West Cave in the Station Area. The main area is a long tunnel that leads to a large area where the Master Emerald's shrine can be found.

When playing as Sonic, this area become accessible through a cutscene where the West Cave is blown open. Inside this cave is a wind tunnel (like the one in Windy Cave) that leads to the Station Square Entrance[4] in the West Cave[5] on Angel Island. Along the following tunnel is a frozen doorway, through which the Ice Cave[5] lies, a frozen cave with a lake where the Ice Cap[4] is found. The area outside the tunnel contains the Watch Ape[5] guarding Red Mountain, the Ancient Light, and an old wooden bridge leading to the Emerald Altar[4]/Altar of the Emerald.[5] The ancient altar is where the Master Emerald reside, but is now broken and worn down due to extreme age. It stands on a small piece of ground which is separated from the rest of the island. Only by flying or using the bridge can the altar be reached. In Tails' storyline, this area is blocked by a doorway.

The Mystic Ruins Jungle Area[7] (or just Jungle[1] for short) is a maze-like area of lush, thick jungle with many paths through it and several ledges hanging over it. Several archaeologists are lost there, wandering among the trees. As it happened to the archaeologists, the player can easy get lost in this area without the aid of a map.

The Jungle is accessed via the Jungle-Bound Trolley Car in the Station Area and leads to this area's Station Square Entrance[6] on a cliff. The Jungle holds the Pyramid[6]/Ancient ruin[7] which is a large mayan-like shrine that used to be the holy site of the Knuckles Clan, the location of the Final Egg[6] at the northern's cliff's edge, and a cave holding Sand Hill.[6] This area is also the location of a small wooden structure that is Big's House.[6][7] Also, within the thick jungle lie two alcoves containing two statues which Knuckles must dig up and enter Lost World with.

The Jungle holds a number of Level Up Items. On a ledge above Big's House is the Fighting Gloves, and below Big's bed in his house lies the Power Rod. Two Lures may also be found around the Jungle.

Set in the past, the Mystic Ruins Temple[8] encompasses a great city where the Knuckles Clan live. The player is brought here by Tikal. Whether this is an illusion or actual time travel is unknown, as characters can talk to the locals and Tails even finds the Rhythm Badge here.

The whole city is surrounded by mountains with the "back" of the city facing the great jungle. The city is Aztec or Mayan in appearance, and in the center lies the pyramid-like Shrine of Knuckles's race,[9] still in its pristine state. The only exit to the city is a cave which leads to the Shrine of the Master Emerald. Before its ruin, this place was ruled by Chief Pachacamac. Sonic is the only one who cannot visit this place.

In the western section of this area lies the Rhythm Badge for Tails.

Shrine of the Master Emerald

Set in the past, the Shrine of the Master Emerald[10] consists of the area outside the Mystic Ruins Temple. The player is brought here by Tikal. Whether this is an illusion or actual time travel is unknown, as characters can talk to the locals.

At the end of the road there lies a great stone bridge (most of this bridge is left over during modern times as part of Angel Island) that leads up to the Altar of the Emerald.[11] While still just as old, the altar is not in ruin as the altar will be on Angel Island. The seven surrounding pillars hold the Chaos Emeralds with the Master Emerald at its center. The altar also has water flowing from it; whether this is a fountain or something magical is unknown.

During the Chaos incident, a group of archaeologists were sent to Mystic Ruins to seek out the Shrine of Knuckles's race, although it is revealed by talking to one of the group that the first group sent into the jungle had become lost, and plans were being made to send in a second team. 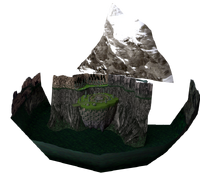