Mystic Mansion is the twelfth stage in Sonic Heroes. It takes place within a haunted castle and an underground cave.

In the mansion, the teams face even more strange things. Hallways go in infinite circles before straightening out, skeletons with mischievous smiles on their faces hide behind doors that go nowhere, paintings come to life as robots emerge from the walls, and huge spiderwebs hang above bottomless pits. Taking the Trolley mid-way through the stage reveals that it is built underground alongside a massive cave. There is a well in the mansion's center that opens up into a distorted, multicolored pocket dimension filled with pumpkin ghosts.

The pocket dimension has a strange water-like background inside of the well that changes color with the appropriate formation. Once the three formations are completed, the team (Sonic or Dark) arrive on the outside of the mansion in a giant reservoir with a Goal Ring in the center.

Mystic Mansion, much like Hang Castle, is filled with booby traps (such as the pumpkin ghosts that appear, and the Trolleys).

After managing to get inside of the creepy fortress, Team Sonic must escape the mansion located within to intercept the Egg Fleet. Team Dark must escape to interrogate Dr. Eggman. Team Rose must escape to rescue Froggy and Chocola. Team Chaotix must put out the 60 red torches in the mansion to escape. When the level is beaten by Team Dark or Team Sonic, players will find themselves standing in a giant, ghostless, calm reservoir on top of Hang Castle.

Lasers will occasionally block the player's path in this stage, but if Espio is invisible he can slip through them unharmed. 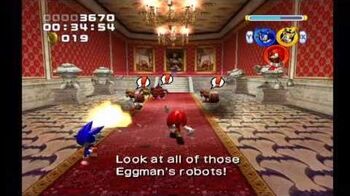 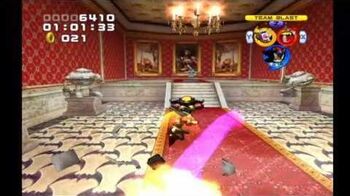 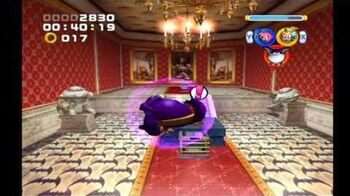 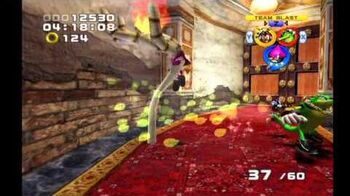 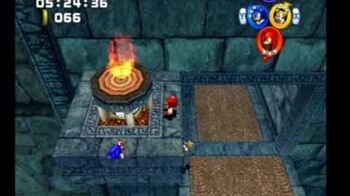