Sonic and Tails in the Mystic Cave Zone

Robotnik's been digging for Chaos Emeralds in this eerie forest of flickering lights, glow-worms and stinging centipedes. Hang onto the ivy to discover escape routes.

Mystic Cave Zone (ミスティックケイブ[2], Misutikku Keibu?, lit. "Mystic Cave") is the sixth Zone in Sonic the Hedgehog 2. As with most other Zones in this game, Mystic Cave Zone consists of two standard Acts with a boss fight at the end of Act 2.

Mystic Cave features moss-covered rocks and dangling plant tendrils within these dimly-lit subterranean spaces. Impassable walls can be lowered to form convenient bridges if one is sharp-eyed enough to spot the hidden switches within the slimy vines that hang from the ceiling.

Dr. Robotnik has deployed a variety of fiendish Badniks within the caves to slow our heroes down. Crawltons are particularly frightening; these Badniks spring out at the playable character from hidden nooks, with their heads being the only weak point. Flashers hover around enveloped in forcefields of light and the only way to destroy them is to wait until the shield peters out.

Act 2 is notorious for having a particular part in which the player must grab a vine or else drop into an inescapable pit of spikes, which would be troublesome even for Super Sonic. However, in the 2013 remaster of the game, the spikes were removed to reveal a special secret passage underneath a wide drop: Hidden Palace Zone.

In this Zone's boss fight, Dr. Robotnik attacks with a double-barreled drilling machine. He's been mining in the caves in search of the Chaos Emeralds. This burrowing mech tunnels into the roof of the cavern, dislodging rocks and stalactites which rain down injuriously on Sonic and Tails. After bombarding the heroes with debris, Dr. Robotnik's mecha descends and comes at them with its drilling arms. Dodge and jump on Dr. Robotnik to defeat him.

Mystic Cave also appears as a racecourse in Sonic Drift 2 for the Sega Game Gear. This stage is the fifth track of the White Grand Prix (White being the intermediate of the three available tournaments), coming after Hill Top and before Emerald Hill. Unlike the majority of races in the 2nd Chaos Grand Prix, this isn't a three-lap circular course; the objective is simply to get through the tunnel system ahead of everyone else.

In the Sonic the Hedgehog comic series and its spin-offs published by Archie Comics, the Mystic Cave Zone is an underground region on Westside Island. Team Dark, Knuckles and Amy came here towards the end of the Shattered World Crisis in order to check out a unique energy signature. While there, they found a passage into Hidden Palace Zone. 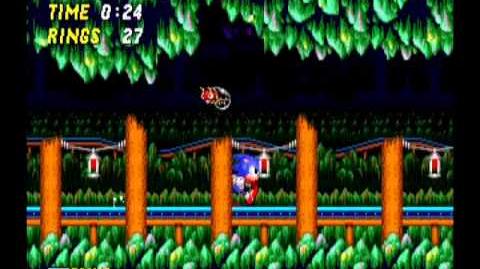