Sonic News Network
Register
Don't have an account?
Sign In
in: Gimmicks and obstacles, Sonic and the Black Knight

An activated Mystery Circle, from Sonic and the Black Knight.

The Mystery Circle is a gimmick that appears in the Sonic the Hedgehog series. Tt is a variant of switches from the world of Camelot that, when touched, makes different objects appear.

The Mystery Circles have two appearances. When inactive, they glow red and resemble a circle with medieval lines which is surrounded by an outer circle with four fleur-de-lis on it which point inward. When active, the Mystery Circles glow blue, their inner circle grows larger and is surrounded by an additional circle, and the fleur-de-lis point outward.

In gameplay, Mystery Circles appear during Missions and can be located on either the ground or the walls. When activating a Mystery Circle, it will cause additional objects to appear on the player's path, such as different types of fairies, Rings or treasure chests. While some of the objects revealed by the Mystery Circles only serve as bonus items, others are necessary for the player to proceed with the Mission. To activate a Mystery Circle, the playable character simply has to touch it. 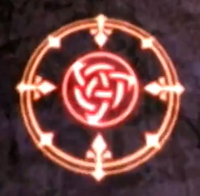