The Mushroom Planet, from Sonic the Hedgehog (film).

It's no Earth, I can tell you that. There's no people, just breathable air and giant mushrooms and stuff.

The Mushroom Planet is a location that appears in the Sonic the Hedgehog film series produced by Paramount Pictures. It is a planet that, like its name implies, is filled with mushrooms.

The Mushroom Planet has a muggy brown sky with a piercing sun. The planet has a breathable atmosphere, but is uninhabited. The surface of the planet cannot be seen, being covered entirely in mushrooms in all sizes that are so dominant that they grow on top of each other. According to Sonic, the mushrooms on the Mushroom Planet are "gross" and "smelly". There is also water on the planet, and it seems to possess at least two moons.

During a battle with Dr. Robotnik on Earth, Sonic the Hedgehog and Tom Wachowski managed to banish Robotnik and his Eggpod to the Mushroom Planet with the use of a Ring.

After spending three months of the planet, Robontik lost his grasp on his sanity. With some remains from his Eggpod and one of Sonic's energized quills, Robotnik would scour the Mushroom Planet with a stone he replaced Agent Stone with, confident that he would be able to return to Earth soon. 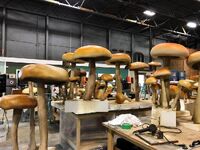