A Mushmeanie, from the Wii U version of Sonic Lost World.

Mushmeanie[1] (ヒドゥン[2], Hidun?, lit. "Hidden") is an enemy that appears in the Sonic the Hedgehog series. It is a mass-produced, mushroom-based Badnik model created by Dr. Eggman that hops around with a mushroom helmet.

Taking the appearance of a mushrooms, the Mushmeanies are robots consisting of a purple head with two small eyes and a gray spring on their bottom. They also wear an orange mushroom cap with yellow spots as protection. Originally, Mushmeanie had black eyes, but they were later re-dyed cyan in Sonic Generations and Sonic Lost World.

Mushmeanies first appeared in Sonic & Knuckles and the lock-on game Sonic the Hedgehog 3 & Knuckles. the player encounters them only in Mushroom Hill Zone, where they hop around as tricky obstacles that will damage a reckless player upon touch. The Mushmeanies must be hit twice with the Spin Jump or Spin Attack to be defeated, as the first hit only removes their mushroom cap. It is only after their cap is gone that they can be destroyed. Also, upon its destruction, a Mushmeanie will release an Animal.

In gameplay, they retain their original attack patterns and means of protecting themselves. However, they are more determined in pursuing their target, namely by continuing to follow the player over an extensive distance, even if they lose their caps. When no one is nearby them, they remain stationary, lurking below their caps. When Sonic gets in their range though, they will pop out from their hideout and bounce toward him.

Mushmeanies are defeated in the same way a in their debut, but in Modern Sonic's case they can be boosted into, instantly destroying them, regardless of their caps.

In the Wii U version and PC version of Sonic Lost World, the Mushmeanies returned as enemies. During the game, the Mushmeanies, along with the other Badniks, got hijacked by the Deadly Six. They are found in Silent Forest Zone 1, 2 and Sky Road Zone ?, where they retain their attack patterns and means of protection from Sonic the Hedgehog 3 & Knuckles. However, in this game, the player can only remove the Mushmeanies' cap with the Flying Kick; afterward, they will be vulnerable to any attack. Also, upon their destruction, a Mushmeanie will release an Animal.

Mushmeanies possess springs that let them bounce around, and are equipped with mushroom cap-shaped helmets that can block an otherwise fatal hit once. 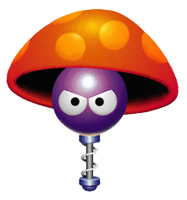