Not to be confused with Moving Crate.

A movable box, from the console/PC version of Sonic Generations.

These boxes can be pushed! Move up close and push to move them around. You can kick them away by pushing them while Boosting!

The movable box,[1] also known as the Movable Crate,[2] is a gimmick that appears in the Sonic the Hedgehog series. They are large cuboid obstacles that the player can push and use in various ways.

Movable boxes are fairly large cuboid figures that the playable characters cannot destroy by any means. In gameplay though, the player can move the movable boxes by pushing (or sometimes pulling) them in one direction, though the player will move at a much slower pace.

Sometimes, the movable boxes serve as obstacles blocking the player's path. Most of the time though, they are a gimmick with an alternate purpose which can help the player progress with the levels, though this depends on the game.

In Sonic the Hedgehog (16-bit) and its numerous ports and remasters, movable boxes are named floating stones.[3] In this game, they resemble green-grayish stone blocks. They can be found in Marble Zone, where they are used to cross lava pools by pushing them into said pools and riding on them as flotation devices. In Marble Zone Act 1, a floating stone is also used to hold down a switch and move up a spike and weight to open a path.

In Sonic & Knuckles and Sonic the Hedgehog 3 & Knuckles, movable boxes appear in both Acts of Sandopolis Zone, where they are brown and sandy rocks that can be pushed down on rolling orbs in midair which the player can use to ride across gabs on the movable box. In Sandopolis Zone Act 2, there is also a path exclusive for Knuckles where he has to use a movable box to keep a door open and advance.

while having selected the Action Window "Catch" and use the control stick to move the crate. To release the crate, press

In Sonic Rush, Zones such as Mirage Road, Night Carnival, Altitude Limit and Dead Line feature movable crates usually blocking the narrow pathways. The player has to push it out of the way to reach touching switch on the ceiling or reach higher section. Moves such as the Super/Fire Boost help move crates faster.

In both Sonic Rivals and Sonic Rivals 2, movable boxes appear in all of the Zones. Their appearances vary between Zones to match their respective theme (for example in Sky Park Zone, the movable boxes appear to resemble Jack-in-the-boxes) but all have the same purposes in gameplay. In Sky Park Zone however, the movable boxes can also be used as Springs if the player jumps on top of them after they are pushed into a Warp Hole, thus launching the player towards an alternate route through the Zone or a Power-Up item.

In the Xbox 360/PlayStation 3 version of Sonic Unleashed, the movable boxes are large boxes of stone with a handle on each side. In this game, they appear normally in the nighttime stages, and in rare cases, in the daytime stages too. Their appearance slightly differ between stages to reflect the surroundings. They mainly serve as a way for the player to hold down Switches and reach otherwise unreachable areas. There are also movable boxes without handles in both the daytime and nighttime Stages which can only be pushed without grabbing them.

To move a movable box in this game, the player must Grab onto it, upon where it can be pushed or pulled. The player can increase Sonic's speed while pulling the crate by holding down 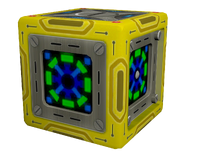 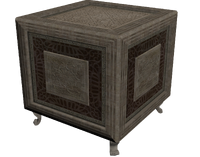