For the secret boss in the Nintendo DS version of Sonic Colors, see Nega-Mother Wisp.

Her kind's planets pulled away from each other

That's a nice mother you have there, Yacker!

Mother Wisp (マザーウィスプ, Mazā Wisupu?) is a character that appears in the Sonic the Hedgehog series. She is a Wisp, the creator of Planet Wisp and the progenitor of her entire species. After Dr. Eggman kidnapped her planets, Mother Wisp was captured by Eggman himself and transformed into the monstrous Nega-Mother Wisp, but was returned to normal by Sonic the Hedgehog.

Mother Wisp closely resembles a jellyfish in overall appearance. Her head is ellipsoid in shape, and is colored pink with circular carnation pink markings on the sides, and upstanding fungus-like hair on top of it. She also has three eyes with cyan irises horizontally across her face.

In the beginning, Mother Wisp gave birth to the entire race Wisp and created Planet Wisp, where she would live with her children, giving them life and raising them.

In the Nintendo DS of Sonic Colors, Mother Wisp and her children were kidnapped by Dr. Eggman when the evil scientist dragged their planets to Earth so he could harvest the Wisps' Hyper-go-on for his Mind Control Ray. Mother Wisp herself was also captured and completely drained of her Hyper-go-on in an experiment by Eggman, transforming her into a Nega-Wisp named the Nega-Mother Wisp. However, Mother Wisp's mutation turned her mindset into a uncontrollable monster which was beyond Eggman's control. The Nega-Mother Wisp eventually escaped Eggman's captivity and went into hiding.

After Sonic defeated Eggman and Dr. Eggman's Incredible Interstellar Amusement Park was destroyed, the Nega-Mother Wisp revealed herself in the space above Earth and began a violent and destructive rampage. Before she could cause any real damage, however, she was defeated by Super Sonic and seemingly purged her of her corrupted Hyper-go-on, reverting her back to normal. Mother Wisp then expressed her gratitude to Sonic and Tails saving her children, before she and Yacker left Earth and joined the rest of their family as they returned the kidnapped planets to their original places in the universe.

In Sonic Runners, Mother Wisp is an S-Rare Speed type Buddy. She boosts Score Bonus during Color Power usage by 150%, or 160% if a Speed type character is being used.

In the "Tropical Coast Event", Mother Wisp was visiting her children on Earth when Dr. Eggman kidnapped her once again, planning to turn her over to the dark side and use her against Team Sonic. After her transformation into Dark Mother Wisp, however, she began rampaging Eggman's base, forcing the scientist to flee. When the White Wisps showed her the beautiful view of the Pearly Beach though, she calmed down and reverted back to normal.

In Team Sonic Racing, Mother Wisp appears in the background of a certain section in Mother's Canyon. During the first lap, she can be seen flying up from behind the broken bridge that leads into the canyon she resides in. She will then create pink roads in midair for the racers to race on. She usually stays in place, but will sometimes change her position. However, she is not an obstacle or a facilitation on the road itself that the player has to worry about.

In Sonic Racing, Mother Wisp appears in the background of a certain section in Wisp Forest.

Mother Wisp is a very nice and kind Wisp with a strong maternal instinct, and cares deeply for all her children. However, as implied by Sonic, she can be quite scary if someone were to get on her bad side.

Mother Wisp is the most powerful Wisp revealed in the series, arguably only equaled by her Nega-Wisp form. As a Wisp, Mother Wisp is able to levitate in midair at will, which serves as her main method for movement.

Mother Wisp is able to generate and store her own unique variant of a powerful energy known as Hyper-go-on inside her own body, which is her life source, and is presumed to be able to store much larger quantities of Hyper-go-on than any other known Wisp. It is unclear to what extent she is able to use her own Hyper-go-on, though she has been shown being able to use it to teleport herself and other objects, and form roads made of energy.

Mother Wisp is seemingly able to reproduce asexually, allowing her to give birth to new Wisps without the need of a mate.

When drained completely of her energy, Mother Wisp transforms into Nega-Mother Wisp, an incredibly hostile and unstable creature with the same powers as her normal self.

"B&F%HRH8$^"
—Mother Wisp saying "Thank you for helping my children. I am Mother Wisp" in her native tongue, Sonic Colors (Nintendo DS)

"A!$&PGB7/TU%"
—Mother Wisp saying "I was so worried when our planets were pulled apart from one another" in her native tongue, Sonic Colors (Nintendo DS) 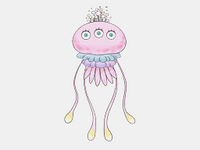 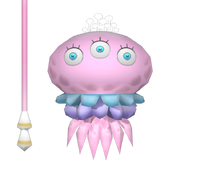