Planet Wisp circuit in the habitat of Mother Wisp

Mother's Canyon is a race track that appears in Team Sonic Racing. It is based off Planet Wisp.[1]

Mother's Canyon is a racing circuit set entirely on Planet Wisp, a planet overgrown with lush vegetation and inhabited by Wisps. Over the course of the race, one can see some species of Wisps on the hills around the route, watching the races. The track's roads lead through rocky canyons and caves, and Mother Wisp's habitat above an extensive lake surrounded by waterfalls, with pink energy roads made by her that lead over the lake and back on to the mainland. Near the starting line, there are also grandstands on which several cheering Chao can be seen. In addition, especially near the starting line, Buzzers can be seen flying around in the background. There are also blue Egg Pawns that cling to the stone walls and chip the rock away with pickaxes.

Along this track, there are places where the player can fall off if they get distracted. There are also spinning sawblades coming out of the ground that the player will take damage from if they collide with them.

At the beginning, the players leaves the finish line and head towards a ramp. From it, they jump onto the cliffs and fall violently down on them. During this jump, the player can pull off many stunts in order to achieve a great speed boost when landing. Also, the cliffs the player will be landing on is split into two rows, each one with different heights.

After crossing the cliffs, the player will follow the road up along a rock wall as it turns leftward. Along this stretch, there will be spinning sawblades. After passing through this section, the player will jump off a collapsed wooden bridge. At that point, Mother Wisp appears as the player lands on the pink energy roads she has created. This energy road has railings, so the player is not at risk of falling off-road. Eventually, Mother Wisp's route divides into two: one going upward and the other going downward. At certain points along these energy roads, they approach each other so that one goes atop the other. Here, the railings on the top road are gone, giving the player a chance to drive down from the upper road and down on the lower road. Eventually though, the roads will both lead back to a collapsed bridge. From there, the player reenters one of the canyons. On the right at the beginning of the canyon in particular, the road rises up like a ramp, which the player can jump off of for extra speed. However, this ramp will have barricades on it that only Wisp power-ups or Power-Type characters can get through.

Whether the player takes the ramp or follows the road, the player will eventually end in a stone tunnel where they can drive along the walls. Eventually though, the player enters a metal tunnel that runs along a rock wall and turns hard to the right. The left side of the of road has no railing however, leaving the player at risk of failing off the road. Once the player is through that turn, they will arrive at the finish line.

Mother's Canyon also has its own mirror image version of it where the left and right sides are interchanged. 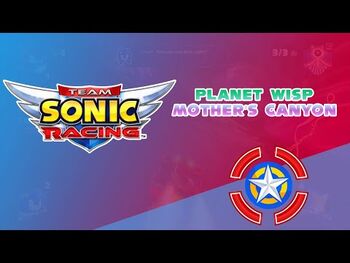