An industrial fortress caught in a clash between the Resistance and the Eggman Empire.

All ships, provide backup to Sonic and the others! Draw the enemy's attention and shield them from damage!

Mortar Canyon (モーターキャニオン, Mōtākyanion?) is the twenty-sixth stage in Sonic Forces, and the ninth stage in the game to be played as Sonic.

Mortar Canyon takes place inside the Eggman Empire Fortress, and encompasses the route leading from the edge of the fortress to its Central Tower. During the events of the game, Sonic ventured through Mortar Canyon in order to confront Infinite.

Mortar Canyon is set inside the Eggman Empire Fortress, which is located in the center of a barren gray wasteland with similar-looking mountains surrounding it. This high-tech fortification is located in the middle of a deep crater whose edges are surrounded by high walls. These walls extend into the depths of the crater, forming staircase-like levels. Rising up from the center of the crater is the Imperial Tower, a massive high-tech tower with tall metallic pieces forming hoops circling around it. The sky here is also completely overcast by gray clouds. One can also see the Resistance's air fleet fighting fiercely with the Eggman Fleet in the sky above the fortress.

Mortar Canyon itself is a downward slope through the metallic canyons in the fortress. The paths through the canyons consist of platforms and bridges that all sit far above the canyons' dark bottoms. Furthermore, the canyons are equipped with red lasers in many places that either survey the local airspace or form laser grids covering the canyons' bottoms.

Having been saved from annihilation thanks to the Avatar, the Resistance army continues the battle against the Eggman Army at the Eggman Empire Fortress, Eggman's final stronghold that they need to overcome to win the War to Take Back the Planet. Meanwhile, Tails reveals over the radio that Infinite's Phantom Ruby prototype must have been severely weakened from forming the virtual sun and that this is the Resistance's one chance to finish Infinite off once and for all before he regains his full strength. This prompts Sonic to chase after Infinite, while Knuckles commands all of the Resistance's air force to attack and take as much firepower off of Sonic as possible. Eventually though, the Resistance's ships are forced to retreat by the Eggman Fleet, with the Resistance commander on the flagship ordering all hands to abandon ship as he tells Sonic they have done all they can and wish him good luck. By the time that happens however, Sonic has already reached the Central Tower where Infinite is waiting for him for their final confrontation.

Mortar Canyon puts a lot of emphasis on the player's platforming skills. Throughout the stage are small platforms and narrow paths, all suspended over bottomless pits (which are marked with red laser grids); one mistake, and Sonic will fall to his doom. The stage also has several strings of Nebulas in midair for the player to skip across (and thereby cross gaps) using the Homing Attack.

Being a Sonic stage, Mortar Canyon has numerous Wisp Capsules filled exclusively with White Wisps along the way for the player to charge their Boost Gauge with.

All three routes will eventually rejoin each other in an underpass the player will arrive at. In the vicinity of this area, the player will then find a Grind Rail that will take them to a highway. On this highway, the player will encounter Egg Walkers that will run from Sonic while firing missiles at him. Eventually, the highway will end in another huge canyon with numerous platforms dotting it. The player has to use these platforms and their gimmicks and/or enemies to get to the other side of the canyon.

Once on the other side of the canyon, follow the path down a steep slope to arrive at another highway with more Egg Walkers. At the end of this road, the player will encounter another canyon, those path through it consists of parallel paths at different heights and long platforms. After getting to the other side of the canyon, the player will land on another highway that leads straight to the Central Tower. Along it, the player will encounter numerous Egg Pawns and more Egg Walkers while Valkeens bombard the sides of the highway. Should the player survive this road, they will arrive at the goal at the base of the main tower. 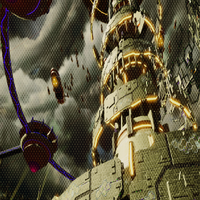