This tri-ped will stop at nothing to try to hit you with his tar-balls.

The Mor-Tar is an enemy that appears in the Sonic Boom series. It is a mass-produced model of Destruction Troops created by Lyric the Last Ancient.

Possessing red plating and gray joints, the Mor-Tars' torso resembles a broad humanoid's with small rings overarching their shoulder sections. As a head, they have a large purple eye with green sclera and a helmet with a sharp horn. Instead of a neck, their "heads" are half-embedded in their torso. Also, they have a thin tar cannon on their chest. As a pelvis, they have a disk with three legs attached, each with four points of articulation.

The Mor-Tars were created in the Robot Facility by Lyric the Last Ancient five millennia ago to help him destroy the earth's lifeforms and conquer it.[1] During an attack on the remaining Ancients however, the Mor-Tars were shut down when Lyric was imprisoned.[1][2] In the present, they were recovered by Lyric after he got out to search for the Crystal Shards and battle Team Sonic too.

The Mor-Tars can be found in Shadow Canyons and Ancient City. In gameplay, they normally walk around idly within their patrol area, but when they spot the playable character, they start shooting at them, with every shot taking a few seconds to load. A Mor-Tar also takes two hits to be destroyed by common attacks, as the first hit only takes away its armor. Sometimes, the Mor-Tars are also equipped with purple shields that protect them from harm. However, these shields can be removed with the Enerbeam or plowed through with a Sprint empowered with the "Mega Sprint" upgrade. Should a Mor-Tar be successfully destroyed though, a new one will later respawn to take its place. Additionally, the seventh Toy the player purchases from Q-N-C's Toy Shop will be a Mor-Tar figurine.

After Team Sonic and Shadow defeated Lyric, the Mor-Tars were stopped once more.

Usually, the Mor-Tars are mindless and silent drones unwaveringly loyal to Lyric the Last Ancient, having been programmed to obey his every command.[1] Other than that, they are quite persistent and determined as they will stop at nothing to attack their foes with their tar-balls.

The Mor-Tars can generate tar and shoot them as dense balls at their opponents. They also have extra layers of armor for enhanced durability. 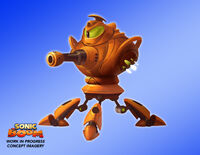