The moon after the Mind Control Ray's impact, from the Wii version of Sonic Colors

The Moon is a location that appears in the Sonic the Hedgehog series. It is the only satellite of earth. It rotates around the earth along with the sun, making it the only glowing celestial body in the sky during the night time on earth along with the stars. It did not have much of a role in Sonic games at first, only appearing in the background of several zones until it became a notorious, minor plot element in Sonic Adventure 2 and even becoming a setting of the titular extra zone in Sonic Advance.

The moon is first time seen in the night background of the Special Stage in Sonic the Hedgehog (8-bit), where it is displayed as a yellow crescent.

The Moon is later seen briefly in the background of Chrome Gadget, the third zone in the competition mode of Sonic the Hedgehog 3.

The moon is also seen at the night background of all race tracks in Sonic R.

The moon appeared once again in Sonic Adventure 2, where Dr. Eggman has gotten six of the seven Chaos Emeralds and set them on to the super weapon of Space Colony ARK called the Eclipse Cannon at the mid-point of the game. Eggman then manages to get a signal to all networks all around the world, giving threat declare and showing the power of Space Colony. He then activates the not yet fully loaded Eclipse Cannon, firing its large, energy wave to the moon, which shatters the moon half. This leads all of mankind witnessing the cannon's power. Eggman has given less than one day's time before the next strike, this time with earth as his target. Along with all humans, Sonic, Tails and Amy notice this event as well, making them wonder where Eggman acquired the power to operate the cannon.

The moon is next seen full again (see the next section) in Sonic Advance, where it can be seen right corner at the background of X-Zone after destroying Eggman's last vehicle. Eventually it is shown after the battle, that Eggman is escaping to the moon. Sonic then transforms to Super Sonic and pursues the doctor, who has yet got one card on his sleeve. The moon becomes the setting to the titular extra zone in the game, where only Sonic can enter after gaining all seven Chaos Emeralds from Special Stages. After defeating Eggman once again, Super Sonic travels back to the earth a few days later, while Tails notices him during his flight in the Tornado.

The moon is then seen once again at the background of Hang Castle in Sonic Heroes where it is depicted with a sinister face.

Two moons are seen in Chaos Angel in Sonic Advance 3

The moon is seen again in the cinematic intro of Shadow the Hedgehog.

The moon is seen at the ending of Sonic the Hedgehog (2006) during the festival of Soleanna. It is also seen in the second section of White Acropolis.

In Sonic Unleashed, the moon is seen in the background of many nighttime Acts in each Stage and Town Stages. It is implied that, when the sun goes down and the moon rises up, Sonic transforms into the Werehog. Similarly the moon is shown prior to Sonic's transformation in Sonic: Night of the Werehog.

In both the Wii version and Nintendo DS version of Sonic Colors, and the remaster Sonic Colors: Ultimate, when Eggman tries firing his giant Mind Control Ray at Sonic's world, the cannon gets destroyed due to an energy leakage. As many mind control rays starts flying headlong around the surrounding space, one of the rays makes an impact on the moon.

The moon is then shown again fully at the background during the rematch on Space Colony ARK in console/PC versions of Sonic Generations.

The moon can be recognized on the night background of Silent Forest Zone 2 in Wii U version of Sonic Lost World.

The moon is clearly visible in the sky in all the Mystic Jungle levels, as the levels take place at night in Sonic Forces.

During Sonic Adventure 2, Dr. Eggman is seen blowing up half of the moon using the Eclipse Cannon, but it is shown to be full again in later games. It has led to common confusion in the community, leaving questions and theories about whatever happened to the moon in between two games. At Sonic Boom 2013, Takashi Iizuka confirmed that this is because only the dark side of the moon was destroyed, meaning the side facing the planet is fully intact.[1][2] Despite the moon's loss of mass though, it has not affected the tides on earth.[2]

Sonic Advance 3 depicted the moon with a second, smaller one at the background of Chaos Angel, which is yet replicated later on the background of Crimson Crater race track in Sonic Riders: Zero Gravity. As Little Planet is also in an irregular orbit, it could be that or a similar planetoid.

The moon (on the left corner) as seen at Chrome Gadget, from Sonic the Hedgehog 3. 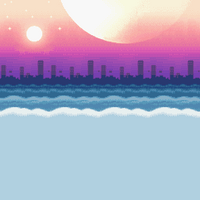 Background of Chaos Angel with two moons, from Sonic Advance 3.