Monopole with view over Megalo Station.

The famous city of the future

Monopole (モノポール, Monopōru?) is the primary setting in Sonic Riders: Zero Gravity. It is a large and highly advanced metropolis referred to as "the famous city of the future".

Monopole is a high-tech, streamlined city. It has tube-like roads with hover-cars, colossal building structures and robot-workers walking on the streets, making it resemble something out of the future. Monopole has a large variety of different capital-city elements, such as mass transport by train, parking lots, a museum, gardens, and freeways. Besides the metropolis of Megalo Station, it potentially also includes areas, such as Aquatic Capital and Botanical Kingdom (depending on translation).

Monopole and its regions' reliance on robotic technology is exploited by Dr. Eggman during Sonic Riders: Zero Gravity. Operating behind the scenes of his shell company MeteorTech, a leading security manufacturing company, Eggman worked towards completing his Eggmanland project; by using Monopole's dependency on technology, Eggman saturated Monopole's industrial economy with his own SCR-GP model robots, planning to later seize control from Crimson Tower with his robots once his machines had thoroughly infiltrated society.

Locations confirmed to be in Monopole: 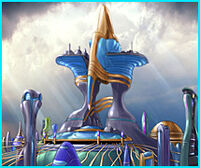