Monkey Target is a racetrack that appears in Sonic & Sega All-Stars Racing. It is one of three tracks in the game that represent Super Monkey Ball, as well as the third course of the Monkey Cup.

The myriads of tight corners in this stage are littered with item drops, but are also made dangerous by the presence of the large red and white balls. Near the very end of the course, there appears a series of ramps that form switchbacks. As the player ascends one, he/she already needs to be planning to loop back sharply, as the ramps repeat that pattern several times. Drifting in this area is useful to pass a lot of opponents.

For this Pirates' Ocean-located track, these are the following tracks selectable for the course: 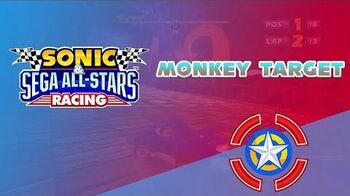