Monkey Khan, originally named Ken Khan, is a character that appears in the Sonic the Hedgehog comic series and its spin-offs published by Archie Comics. He is a Mobian Chinese monkey with blue eyes and cybernetic implants that appears to be a rather erratic individual. In his early life he lived in a village of pacifists, wanting to distance themselves from the war between the Kingdom of Acorn and the Overlander city of Megaopolis. He wears a Power Ring headband, a red and blue vest, and also has a powerful staff and a flying cloud.

Ken didn't exactly fit in due to his boisterous nature, earning the ire of his father; Lord Lau Khan. Ken pointed out that he was good at fighting and totally rejecting violence was impractical due to the risk of war. His father explained his reasons but soon Julian Kintobor arrived, wanting to use the villagers as test subjects for experiments in cyborg technology (a predecessor to roboticization).

Ken was the only one strong enough to survive the process. To test his abilities, Julian directed him against an Overlander platoon, one that ended up scattering before the monkey's assault. However, he proved strong enough to resist Julian's orders, causing him to be sealed in a metal crate. Sally Acorn inadvertently released him years later, now going by the name of Monkey Khan. Upon hearing of Robotnik's involvement in his creation, Sonic instantly assumed him to be an enemy, but the two soon made up.

Sonic and Tails later encountered him in a village similar to his own. Khan was brainwashed by the Iron Queen into doing her bidding. Sonic and Tails quickly managed to break the spell, and all three of them managed to defeat the Iron Queen and King. Khan found peace in the village; however, with the coming of Robo-Robotnik it was torched and its inhabitants roboticized. Monkey Khan vowed vengeance, seemingly taking it out on the Overlanders that had arrived outside Robotropolis. He didn't care if he scared or injured them, revealing his erratic nature. Eggman activated the city's force field, but Khan flew away, still desiring revenge.

Monkey Khan was seen fighting the Xorda in the Sonic Adventure 2.5 arc but disappeared into obscurity. However, Khan made his return shortly after Eggman's defeat, crashing the victory celebration in New Mobotropolis. He informed the Freedom Fighters of the change in power in the Eggman Empire, and teamed up with Sonic to acquire more information. Khan also seemed intrigued by the fact that Sonic and Sally were no longer a couple, hinting at a possible love triangle. Khan has been under the influence of the Iron Queen, who controlled him with her technomagic and turned him against his friends. Sonic managed to grab a Power Ring from the Lake of Rings, after Snively destroyed Monkey Khan's and Monkey Khan regained control. Sonic then asked what he meant when he said that he "was no king" and Monkey Khan told everyone that Regina took control of him and had him destroy the Dragon Kingdom Freedom Fighters. Monkey Khan later helped Sonic protect the force field surrounding Old Robotropolis (the toxic energy fuels the shield around New Mobotropolis) from Jun Kun. Unable to harm the Iron King, Sonic comes up with a plan and gets Monkey Khan to distract the Iron King so Nicole could reroute the power underground. Later on, Khan is seen saving Militia and Li Yeun from three SWATbots. Afterwards, he tells them to go back inside the temple with the rest of the villagers. Khan moves on to protect the village until he spots Dr. Eggman. Khan attacks Dr. Eggman until Mecha Sally stops him doing so. Khan soon realizes that Sally had been Roboticized and weaponized by the doctor himself. (SU #39) 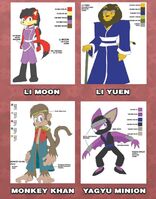