Sonic News Network
Register
Don't have an account?
Sign In
Advertisement
in: Sonic and the Black Knight stages, Fire theme

A mine riddled with lava.

Eastern region of The Outlands

Molten Mine (モルテン・マイン, Moruten Main?) is the sixth area of Sonic and the Black Knight. It is an area in the Outlands where Sonic meets and battles Sir Percival of the Knights of the Round Table.

The Molten Mine hosts a mining town for the Townspeople, who have emigrated there from far-off places, next to an active volcanic area. The Molten Mine has - for a long time - been a source of wealth for King Arthur's kingdom, due to the large amounts of its natural resources that can be found there, such as coal, mineral ores and precious metals, all being excavated by minecarts. In fact, there is so much tonnage moved out of the Molten Mine that the mine carts containing the valuable resources runs directly through the town and the homes of the Molten Mine's residents.[1]

After meeting Nimue and passing her tests, Sonic starts to act overconfident. Caliburn tells Sonic that he shouldn't relax as he still needs to take down Sir Percival, and that she is the strongest of the Knights. Sonic says that he isn't worried, as he has the greatest sacred sword with him. Sonic travels through this stage in order to pursuit Sir Percival and her sword, Laevatein. When Sonic confronts Percival, she asks Sonic for his name and master, to which Sonic replies "I'm Sonic the Hedgehog, and I have no master, except for the wind that blows free". She then challenges him, under the name "Sir Sonic, Knight of the Wind" to battle. After Sonic defeats her, Percival falls off a ledge, but Sonic saves her. Confused at why Sonic would save her, Sonic tell her that whim is his "other master". Caliburn then tells them to "save the hugs and kisses for later", which causes her to blush. It is also the only level in the entire game to have a shuttle loop. There are a small amount of people living in this dangerous area for unknown reasons. However, it could easily be assumed that they are there because they are miners working at Molten Mine.

These items can be acquired from the stages:
Amethyst, Diamond, Flintstone, Garnet, Katana, Lily, Lump of Bronze, Rusty Rapier 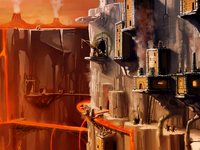