What lurks at the heart of the ravenous, all-consuming black hole?

Mobius Strip is the final course in the Babylon Story in Sonic Riders: Zero Gravity. It features the boss fight against Master Core: ABIS.

Mobius Strip is set around Babylon Garden enveloped under a dark, scarlet sky. True to its name, the course path is shaped like the figure of the same name along a silver road embedded with turquoise crystal-like placements on the sides and clear road segments along the center.

The "lightless black" is a black hole that will engulf and destroy everything. Sonic, Jet, and friends take a final stand in order to stop it!

In Mobius Strip, the player is not allowed to control their usage of gravity actions and is unable to perform the Gravity Control at all. Depending on the mode, Gravity Dive can be either activated as normal or will automatically activate in certain circumstances, regardless of the player's GP Gauge. This is a very simple track layout with almost no obstacles and only four Trick Zones to perform Tricks to build up Gravity Points. There is also a Grind Section and Air Ride Catapults for those with the right Extreme Gears to use for more points. When Gravity Dive is active, some of the turquoise crystals are lifted into the air, which can be used for Meteor Bursts.

The course is unlocked in Free Race and Time Attack once the player has encountered and cleared the course in Story mode.

In Free Race, Time Attack modes and in some missions of Story mode, Master Core: ABIS will be present hovering along the track while staying in front of the leading racer. He will attempt to attack with energy bolts or meteors, depending on the current lap count and lap settings. Riders riding on Bike and Wheel type Extreme Gears can knock back against either of those attacks for Gravity Points. Between each wave, Master Core: ABIS can distort gravity, causing all racers to automatically use Gravity Dive. The player must make use of the lifted turquoise crystals to perform Meteor Burst to reach Master Core: ABIS faster. In order to progress to the next lap, the player must hit Master Core: ABIS twice with the Gravity Dive.

In Story Mode, the player must complete three laps within five minutes as Sonic to defeat Master Core.

When this course is played in Survival Relay, Master Core: ABIS is entirely absent from the course and the player can perform Gravity Dive but is still unable to perform Gravity Control. Also, there are two changeover areas for the player to swap with another instead of just one seen in the other courses. 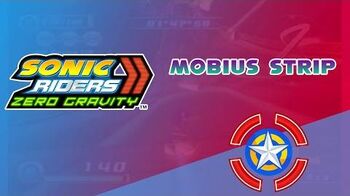