"Missile Wrist Rampage" is the third episode in the anime series, Sonic X. It first aired in Japan and the United States on 20 April 2003 and 20 September 2003 respectively.

The episode begins at Dr. Eggman's Fortress on the unnamed island where the viewers last saw Dr. Eggman claiming that he was going to conquer this new planet as part of his Eggman Empire. As Decoe gives him a pack of cards with various robots on them, he cannot choose which one to unleash upon Station Square. He then uses a slot machine device to choose for him and it turns up with E-23 Missile Wrist's picture. With the decision made, he and his robot set out.

Underneath the main streets of Station Square, Amy and Knuckles are wandering in the sewers discussing about how Sonic's actions led them into this new world. Knuckles blames Sonic for the cause of this but Amy defended that Sonic was only attempting to stop Eggman. Even if Dr. Eggman was causing trouble, Knuckles said that Sonic shouldn't have pushed too far to trigger Chaos Control which warped them to this world, causing an argument between the duo. The very next scene skips to the beach where Missile Wrist bursts from the waters and terrorizes the people who are currently having fun there. It wastes no time in using its missile wrists to destroy the cars and structures around the area. Eggman flies overhead in his Egg Mobile saying that now that they had established a beachhead, it was time to set their sights on the city.

Chris comes outside to see Tails washing the Tornado 2 with Chuck while and Cream and Cheese having their own private tea-party. He asks Tails to tell him where Sonic is. Cream overhears and tells them that Sonic was supposed to be exploring downtown. Chris fears that the police might catch Sonic if he was not careful, but Tails denies this, saying that Sonic likes danger and it is unlikely that he will ever be caught. Chris tells Tails that they need to search for him. Eggman has reached deeper within the city and a massive panic is now unfolding. The police officers try making a blockade and shoot at the robot advancing in their midst. However, both attempts with bullets and flamethrowers fail. Eggman deals them all the finishing blow and seeks out the tallest building he can find.

Meanwhile, Chris, Tails and Chuck set out to look for Sonic both by land and air. Meanwhile Sonic was nowhere near Station Square however. He was off running in the mountains in an unknown location. Back in the sewer, Amy stirs up another conversation with Knuckles on their chances of being able to get back home. Knuckles responds simply by saying that he has to in order to protect the Master Emerald, no matter what the solution may be. They then hear the racket going on from above them. Knuckles sees the manhole and opens it up to see the trail of destruction left by Missile Wrist.

Missile Wrist crashes into a tall building, frightening the people inside as they take cover. Eggman instructs it to proceed to the roof where they can do more damage. Eggman rides his Egg Mobile to the top while Missile Wrist uses his arm as a grappling hook and pulls itself to the top. Numerous police cars gather underneath them, which only prompts Eggman to get excited. Eggman says it's time to get the show on the road and somehow is able to project his image onto all the televisions and mechanical devices in the city. He tells them all his name and his intentions to take over the city and make it a part of his new Eggman Empire. The police chief shouts up at him, telling him to stop his madness, surrender, and be arrested. Eggman responds by commanding Missile Wrist destroy one of their cars. The police chief submits and agrees to bring in the Mayor of Station Square so they can talk through surrendering the city.

Unable to find Sonic, Tails and Chris set out in the Tornado 2 to try and deal with the situation themselves. At that time, the Mayor of Station Square finally shows up and tells Eggman through his megaphone that he will not surrender the city. Eggman snaps his fingers commanding Missile Wrist to demolish a nearby building, obviously demanding another answer. The Mayor responds saying that his charter technically doesn't allow for him to surrender the city. Completely disgruntled and annoyed, Eggman issues for Missile Wrist to destroy the city. However, Tails swoops down in the Tornado flying past Eggman.

Eggman tells Missile Wrist to blast them out of the sky. It proceeds to fire its missile wrists at the blue bi-plane. Tails tries to counterattack with the Tornado's bullets but Missile Wrist's armor is too thick to be budged. Missile Wrist succeeds in taking out the Tornado 2's propeller. Tails quickly deals with the problem by having it transform into its secondary form (the jet version, which does not use a propeller). However, he's still unable to get in any kind of blow on the robot as they barely avoid the missiles fired by Missile Wrist. Knuckles and Amy finally reach the building where Eggman is carrying out his ambition. Amy states that they need to go to the roof and help Tails. Knuckles claims that he has more important things to do which upsets Amy. She goes in herself to help which prompts Knuckles to follow her knowing that she's only going to get herself harmed. Amy goes inside an elevator, with Knuckles attempting to reason with her but the doors close. Attempting to find another solution, Knuckles discovers a nearby door marked "Exit".

Sonic, having re-entered the outskirts of the city, sees the commotion on TV through one of the windows of a shop. Sonic smirks and races toward Station Square to deal with the problem. Knuckles reaches the roof, who then needs to plan a strategy to defeat Missile Wrist. Amy reaches the roof as well and charges at the robot with her hammer and whacks Missile Wrist's leg with it despite Knuckles' warning. Unmoved by the impact, the robot then turns and grabs Amy. Knuckles runs in attempting to save her but Eggman stops him, saying that if he tries then Amy's a goner. Missile Wrist emphasizes this by squeezing Amy's body tightly, making Knuckles flinch with anger.

Tails and Chris observe this knowing there's nothing they can do from where they are. However, they oversee Sonic heading towards their location and fly below to catch him. Chris tosses Sonic a Ring and he heads off toward the building. Eggman tells Missile Wrist to set its target sights on Sonic. Missile Wrist acknowledges this and throws Amy behind him, where Knuckles catches her. Sonic shoots up the building while Missile Wrist fires several missiles on him. It fails and Sonic proceeds high into the sky. Eggman tells it to fire its missile wrists at Sonic, but that fails as well. Sonic isn't at all fazed by the attacks and even goes so far as to break-dance on the missile wrists. Eggman is only getting angrier however. Knuckles asks Sonic to try the "old slap on the wrist". Sonic gets pulled in on its wrist and tricks it into slamming into its own arm and destroying it. Sonic quickly jumped into the air before the attack landed. Eggman took his chance and had more missiles from Missile Wrist's cockpit fired on to the hedgehog while he was suspended. That, however, failed as well, even though they seemed to connect. Sonic spins below and bursts through Missile Wrist, effectively destroying it. Eggman, who is covered in soot from the explosion, grumbles and flies away while claiming revenge and control of the Chaos Emeralds.

Amy hugs Sonic and congratulates him on the victory. However, they are all interrupted when G.U.N. soldiers reach the roof and point their guns at Sonic, Amy and Knuckles. Tails flies by them and puts out a ladder telling them to get on. Sonic and Amy quickly grab on but Knuckles seemingly wants to fight them. After more convincing, Knuckles finally runs and escapes with them. Chris says that they will all stay at his house until they can get back to their planet. Knuckles declines the invitation and then lets go of the ladder, gliding to an unknown area in the park below. Amy questions Sonic Knuckles' decision and Sonic simply replies that Knuckles does things his way. The episode ends with them flying off into the sunset. 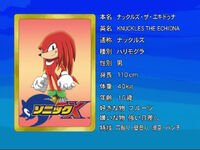 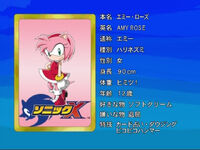