Miranda Curtis (ミランダ・カーチス, Miranda Kāchisu?) (Suzy in the English dub) is a character in the anime series Sonic X. She works for Nelson Thorndyke in Thorndyke Industries.

Miranda told Nelson that the documents were ready. As instructed by the boss, Miranda made a lot of complaints about electronic devices on his desk. Nelson could not believe that his products were so bad. Miranda turned on the television and showed Nelson a report of the last few days. The society began to imitate Sonic in a lifestyle. After the program ended, Miranda told Nelson that the people who acquainted with Sonic are beginning to avoid working (including their employees), or do not apply in their jobs. The result is a deterioration in the quality of the products and a lot of complaints. Before Nelson took the right steps, he learned that his son was sick. Nelson ordered Miranda to prepare his super-fast helicopter and to bring home appliances and to deal with the complaints at the end of the day.[2]

Miranda is a hardworking and intelligent person who dislikes being unemployed. 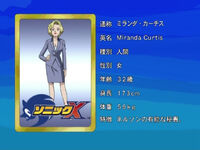 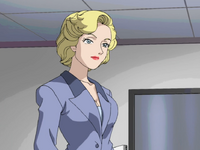 Retrieved from "https://sonic.fandom.com/wiki/Miranda_Curtis?oldid=2277957"
Community content is available under CC-BY-SA unless otherwise noted.