Mirage Road (ミラージュロード, Mirājurōdo?) is a Zone in Sonic Rush. It is the third Zone for both Sonic and Blaze. Like most other Zones in Sonic Rush, Mirage Road consists of two normal Acts and a separate Boss Act devoted to the local boss. It take place in an Egyptian-style desert littered with stone pyramids.

It is a hot, desert labyrinth with an Egyptian theme that extends even below the surface. The Zone resembles past desert-themed levels such as Sandopolis Zone from Sonic & Knuckles and Pyramid Cave from Sonic Adventure 2.

After discovering an expanding tear in the space-time continuum that threatens reality itself, Sonic and Tails head out to find out what connection Dr. Eggman, Eggman Nega and Blaze have to it. Their search takes them to Mirage Road where Sonic encounters Eggman Nega in the Egg Scarab at the end of the Zone. During the ensuing battle, Sonic manages to defeat Eggman Nega. Eggman Nega then leaves in his Egg Mobile, promising not to forget this. Sonic tells him to wait, but is ignored.

Still trying to find the remaining five Sol Emeralds with Cream acting as her guide, Blaze arrives in Mirage Zone. Making it to the end of the Zone, Blaze finds Dr. Eggman in his Egg Scarab. Defeating Eggman, Blaze sends him flying in his Egg Mobile with a fiery kick, which causes Eggman to drop the yellow Sol Emerald. Grabbing the Sol Emerald, Blaze watches contently as Eggman flies into the distance.

Mirage Road is the first of three levels to consist of rooms that trap in the player. The player must then destroy a set amount of Badniks in order to escape. Towards the end of both acts, the player has to ride along a moving platform where boulders and enemies will drop from the top of the screen. Its speed changes according to the inclination of its path. When in higher parts of the Zone, there are several sand slides that the player can slip down on. There are also sling-elevators that when boosted into will launch the player onto the adjacent platform above them in a catapult-like style. However, they will slow down if the player has no energy in their Tension Gauge.

When playing as Sonic, Special Generators appear throughout this Zone which can warp the player to the third Special Stage for a chance to collect the yellow Chaos Emerald.

In Act 2, the player will arrive on a platform that will fall into a flowing river and is converted into a thin floating vessel where the player can freely move along the width (by pressing up or down on

; the player is unable to perform the Spin Dash/Burst Dash in this state) and length of the platform as normal to avoid incoming enemies and boulders falling onto the platform, and Sonic or Blaze will have to dodge falling boulders and Badniks.

The boss fight is Egg Scarab, fought in a circle and resembles the inside of a pyramid tomb. The boss itself is a robot that looks like a giant, metallic scarab. It attacks the player with spiked balls and will occasionally fly up to throw them. It can be damaged by hitting the balls it rolls around when they aren't spiked up into its back, the boss' weak spot. Try not to get distracted by the piles after piles of shining gold and treasure in the middle. When playing as Blaze, the yellow Sol Emerald is retrieved after defeating it. 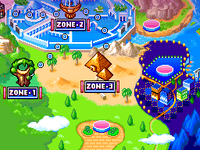 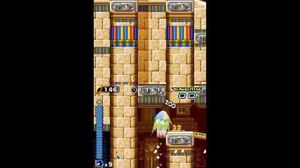 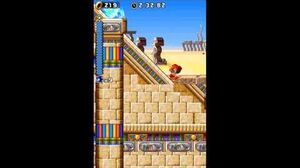 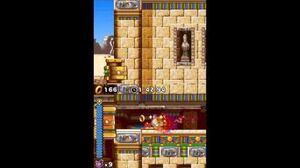 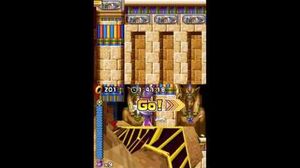