The Mips are creatures from the cancelled video game Sonic X-treme. They are the replacement of the Animals and populate the worlds in the game.

In concept artwork, they look like little marshmallows or triangles but in the actual levels of the game, they are just colored balls with black eyes. It was planned that each zone will have different colors and movement for the Mips, for example, the Mips in Jade Gully Zone are colored blue, purple and magenta and are bouncing as seen in the promotional video of Jade Gully. 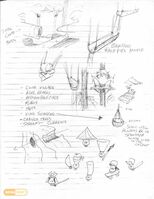 Concept artwork of the Mips
Add a photo to this gallery
Sonic X-treme
Main article | Gallery
Retrieved from "https://sonic.fandom.com/wiki/Mips?oldid=2304160"
Community content is available under CC-BY-SA unless otherwise noted.