Not to be confused with Miles "Tails" Prower.

Miles Prower, from Sonic the Hedgehog #193.

Miles Prower[1] (born day 297, 3225), formerly known as Anti-Tails or Evil-Tails, is a character that appears in the Sonic the Hedgehog comic series and its spin-offs published by Archie Comics. He is the Anti-Mobius version of Miles "Tails" Prower. Initially a member of the Anti-Freedom Fighters, he and his compatriots terrorized their home zone of Anti-Mobius for years, and made a visit to Mobius Prime on one occasion to impersonate and discredit the Knothole Freedom Fighters. Defeated and sent back, he and the others continued their campaign, striking at Sonic when they thought him to be Scourge the Hedgehog. Despite his antagonism for the hedgehog, Anti-Tails consented to serve under him as a member of the Suppression Squad, a new group that soon launched an attack on Mobius Prime.

Miles is for the most part physically identical to Tails, as a Moebian Fox with orange fur, blue eyes, and two tails. In his first appearance he wore a black jacket and had pierced ears, but in his second and third appearances he had a red leather jacket and a new hairstyle, and his fur a brighter coat of yellow than his counterpart.

Evil Tails first joined the Anti Freedom Fighters in launching an invasion of Mobius Prime prior to the downfall of Dr. Ivo Robotnik. He and his cohorts disguised themselves as their goodly counterparts and struck Knothole Village with various acts of mayhem, vandalism, and general misbehaving as had been commonplace on Anti-Mobius. The real Freedom Fighters soon returned to set things straight, but their initial attempts to defeat the Anti-Freedom Fighters failed as their Anti-Mobius selves knew their moves as well as they did. Sally Acorn came upon the solution: switching combat partners. Faced with Rotor, Evil Tails proved unable to overcome the larger and stronger Mobian. Defeated along with the other Anti-Freedom Fighters, he was sent back to Anti-Mobius, where they continued to cause mayhem despite the efforts of the kindly Dr. Ivo Kintobor to stop them.[2]

Evil Tails would remain on Anti-Mobius for over a year, having little to do with Mobius Prime as Scourge was captured by Zonic the Zone Cop and replaced by first Anti-Geoffrey St. John and then Anti-Sally.[3]

When all of the alternate Tails gathered to form Titan Tails, Evil Tails was among them.[4][5]

His one attack against the Knothole Freedom Fighters was entirely unintentional, as he was attacking Sonic the Hedgehog while under the impression that he was Scourge back to cause trouble, a ruse brought about by the evil Hedgehog's machinations.[6]

Some time later, Anti Tails had assisted Boomer in stealing Dr. Kintobor's Globe Posts to allow dimensional travel. A member of the Suppression Squad after Scourge returned to Anti Mobius (now known as Moebius) with Fiona Fox and proclaimed himself king of the dimension, Anti Tails joined the offensive against the Freedom Fighters by attacking Freedom HQ. Confronting his good counterpart, he objected vehemently to being referred to as Anti-Tails, and demanded to be addressed by his proper name of Miles.[7][8]

While attacking his Mobius Prime counterpart, Miles also indicated his disgust at Tails for having chosen to pursue a study of mechanics and technology, despite having incredible connections to the Chaos Force.[9]

When Metal Sonic arrived at Freedom HQ and began fighting Scourge, Miles found a way to avoid helping his king while also showing his loyalty, stating he did not wish to undermine Scourge's strength by assisting him. After Sonic showed up on the scene and displayed his willingness to help anyone, even his enemies, Miles came up with the idea of forging an alliance with their Mobius Prime counterparts to take down Scourge. Leaving Freedom HQ on a fake mission to "bomb New Mobotropolis", Miles met up with Sally, Bunnie, Antonie and Tails to offer an alliance. When Tails attempted to join in the conversation, Miles showed contempt towards his Mobius Prime counterpart, telling him "please don't talk, little boy, we're trying to have an intelligent conversation." Sally accepted Miles' proposal for an alliance knowing their help was needed to defeat Scourge. Upon returning to Freedom HQ, he ignored Scourge's orders for a summary of his mission, instead reporting to Alica that his mission was a success. Immediately thereafter, Alicia told the Suppression Squad to, "show our king just what we think of him", with Boomer and Patch clearly readying for battle.[10][11][12][13]

However, Miles not only betrayed his king, but his true plan was revealed which was for Sonic to finish off Scourge in his home zone. Sonic and Scourge were blasted by Boomer, and thrown back into Moebius by Miles, with Boomer sealing the portal behind them.[13]

Following an ethical debate between Sally and Alicia, Miles was ordered to get the Globe Posts ready to be able to return the Freedom Fighters to Mobius after both groups went to ensure Scourge was defeated in Moebius. Miles was as shocked as the rest of the group to find Scourge had defeated all of his opponents as Super Scourge. When the rest of the Knothole Freedom Fighters and Suppression Squad were quickly defeated, Scourge turned his sights on Miles, identifying him as the mastermind behind the coup. Miles, cowering in fear, denied his role in betraying Scourge, who was threatening to beat him for his betrayal. However, Miles was saved by Silver the Hedgehog and unlike the rest of his allies, wasn't even hurt. Following Scourge's defeat and Miles' attempt to recruit Buns Rabbot into the Suppression Squad, Miles spoke to Alicia about who would be their new leader. Alicia explained that while she may be the figurehead ruler, they both knew Miles held the real authority at this point, to which Miles grinned.[14]

Miles appears to possess Tails' youthful tenacity and desire for independence coupled with a violently rebellious streak. He shows no interest in holding to childhood things, as evidenced by his disdain of the nickname "Tails". He also shows more serious actions than Tails does, and holds his Mobius counterpart in utter contempt for traits that Miles perceives as weaknesses. Miles' actions make him more stubborn and picky than other members of the Suppression Squad. After betraying Scourge and getting rid of him, Alicia's appreciation for Miles' actions led to her making him leader. However, Alicia also implied that Miles had been the real leader of the Suppression Squad the entire time.

Miles prefers to use magic as opposed to technology to accomplish his goals,[1] another area in which he differs from Tails-and another reason he despises his counterpart. While Tails always tries to prove his bravery in battle, Miles will scheme his way out of fights he knows he cannot win. Miles both loathes and fears Scourge, and this is a dark mirror of sorts for Sonic and Tails' relationship of mutual respect, which Miles is disgusted by.

Miles commands abilities virtually identical to those of Tails; flight capabilities, high intellect, and mechanical aptitude. Though he has never been shown to use magic, his disdain for Tails' rejection of magic hints that he may have this capability as well. 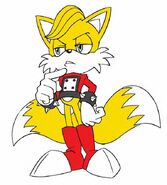