Tails first appeared during Hedgehog Town's annual mushroom festival. He came to town hoping to meet Sonic since he heard that Sonic constantly appears there, when Dr. Eggman showed up to ruin the festival with his giant mushroom robot. During the chaos, Nicky transforms into Sonic and saves everyone. Since then, Tails has become either a good partner for Nicky or sidekick for Sonic, helping him from many situations. Often he also gets captured or getting into trouble along with the rest of the group.

Tails is a two-tailed fox, who knows Sonic and tries to pursue him everywhere as possible, even calling him his big brother. In his introduction in the CoroCoro comics, he is shown to have bit of attitude as he is wearing sunglasses and owns sports car. 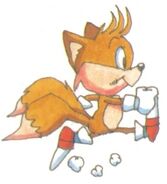 Retrieved from "https://sonic.fandom.com/wiki/Miles_%22Tails%22_Prower_(Shogakukan)?oldid=2101481"
Community content is available under CC-BY-SA unless otherwise noted.