We're fighting to get our world back now. Don't stop. Don't look back! Just focus on the task ahead no matter what! Let's do this, everyone! Charge!

Metropolitan Highway (メトロポリタンハイウェイ, Metoroporitanhaiuei?) is the twenty-third stage in Sonic Forces, and the eight stage in the game to be played as Sonic.

This stage is set within Metropolis, Dr. Eggman's city, which is a magnificent white city, filled with skyscrapers and brimming with technology. During the events of the game, the Resistance launched an attack on Metropolitan Highway after they thought they had disabled the Phantom Ruby.

Metropolitan Highway is located within Metropolis which appears as a magnificent and pristine, but sterile white city where geometric shapes appear to be a recurring architectural theme. It features multiple skyscrapers in various designs, numerous large-scale video screens, and open, see-through highways, all of which look like they are taken straight out of the future. Various buildings with advanced technology fill the city as well. There are also orb-shaped sentries inside the structures and hover cars that fly between the buildings. In addition, the sky above Metropolitan Highway is free of pollution; instead, it is blue with a couple of clouds dotting it. Resistance airships can also be seen engaging the Eggman Fleet in the sky.

The bottom of Metropolitan Highway is not visible; the entire ground level below the skyscrapers is obscured from view by a thick cloud cover. Also, Metropolitan Highway has no traces of organic nature. Instead, it has metallic mimics of trees and bushes along the roads.

The stage primarily takes place on the rooftops and highways of the city, with some sections taking place within the buildings themselves.

Once Sonic enters the city, he is tasked by Knuckles to find Dr. Eggman and capture him to allow the Resistance to win. Amidst the attack, Knuckles and Rouge promise Sonic cover support from all available Resistance forces nearby, including their fleet, now engaged with the Eggman Fleet defending Metropolis compared to the last time the Resistance attempted to take the city, while Amy leads him toward the doctor. Eventually, Sonic and Tails find Eggman, Orbot and Cubot. However, rather than surrendering, Eggman catches the heroes off-guard by calling in Infinite and having him create a portal into Null Space with his Phantom Ruby prototype's power.

As Sonic gets pulled into the portal, the Avatar shows up and attempts to rescue him, only to get pulled into Null Space with him. After the portal closes, Tails is left bewildered by this turn of events as the Phantom Ruby should be powerless. It is then that Eggman returns and gloats that he has learned from his mistakes and had expected the Resistance to try to destroy one of the Phantom Ruby's power sources and, as such, built a back-up power source underneath Metropolis.

Metropolitan Highway has several small platforms in the 2.5D sections that move quickly in one direction the instant Sonic sets his feet on them. The direction in which these plaforms move is indicated by the green arrows on the side of said platforms. While the platforms sometimes help the player cross gaps, they can also be traps that can lead Sonic into walls with spikes that can knock him into bottomless pits.

Being a Sonic stage, Metropolitan Highway has numerous Wisp Capsules filled exclusively with White Wisps along the way for the player to charge their Boost Gauge with.

The stage starts out with a 2.5D section inside a multi-storey building. Begin by following the paths on the right. Along the way, there will be spiraling Grind Rails and the stage's fast-moving platforms. At the end of the 2.5D section, Sonic will enter a 3D section before getting launched into midair by a Spring. Sonic will then enter a skydiving section while missiles are being fired at him from a launch pad directly below him. Avoid these missiles, and follow the highway in front of Sonic after he lands. Along this highway, there will be Egg Walkers that will run from Sonic while firing missiles at him. 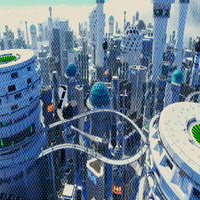