Sonic and Tails in Metropolis Zone, from Sonic the Hedgehog 2.

Sonic's finally chased Robotnik to his own capital city. But he finds a fortress of iron and steel. Danger lurks in every spinning cylinder, pounding piston and rolling gear. Hold the D-Button RIGHT or LEFT to wind the nut up and down the screws.

Metropolis Zone is a heavily industrialized city located on West Side Island. The background is filled with huge buildings in many colors with various working machines, while the foreground is made out of green metal and red/orange chain-link fences.

During his takeover of West Side Island, Dr. Robotnik took control of Metropolis Zone, filling the Zone with Badniks.

Metropolis Zone soon after became either the eighth or ninth Zone that Sonic and Tails would travel through to put a stop to Robotnik's operations. On journey through the Zone, they eventually locate the doctor in the Flying Eggman, which they have a battle against. After his vehicle is defeated, Robotnik flees, while Sonic and Tails head into the skies in the Tornado.

Metropolis Zone features several gimmicks and obstacles, both new and old, such as metal nuts, crushers, Conveyor Belts, and pools of molten metal that inflict damage when touched.

Perhaps the most dangerous aspect of Metropolis Zone comes in the form of the Badniks, for the doctor's city sports probably the most brutal robots in Sonic the Hedgehog 2. Slicers hurl their razor-sharp scythe arms with a boomeranging action, an attack which proves surprisingly difficult for Sonic to dodge and Asterons that are placed with infuriating precision, such that they invariably manage to knock the hedgehog off the giant screw-lifts used to move up the level. There are also Shellcrackers that can stop the playable character in his track by punching them with their giant claw at a fast rate.

At the start of the Act, the player will come across some pistons. Up to twenty-two Rings can be collected by landing on top of each one, including a Super Ring monitor parked on the left corner of the ledge. This is followed by a metallic mesh cylinder, which leads to a long quarter-slant where there is a Switch and a Shield monitor. The Switch will reveal a platform to the left for the player to jump onto. Take then the next piston and the playable character will land on a platform where they will encounter a Shellcracker. Along this road from here are some Crushers that move at high speed. Here, two Switches will open up two platforms blocking the path, with a Super Ring monitor parked in between them. From here, the road splits into two, leaving the player with two choices:

At the beginning of the Act, at the end of the first road is a Switch. Trigger it to reveal a platform. From here, the player will need to cross tiny platforms that ride along a Conveyor Belt. The brown platforms in particular will help complete the gaps. As soon as the player crosses the lava however, they will meet a Shellcracker guarding the elevator. Taking the elevator will send the player for a ride up along the bumpers. The player can either go left or right. Either way they will encounter a Slicer:

At the beginning of the Act, at the end of the first road is a Slicer. Beyond that are brown platforms, which move as the player leaves them. Following them, is a giant contraption consisting of a long platform circulated by two cogs. Also, below it are several pistons and a Slicer. From here, the route splits into two paths: the ledge at the top, which has a Shellcracker protecting the elevator, and a lower route that leads to a different tube, which can be reached via a yellow Spring.

The boss of Metropolis Zone is Flying Eggman, a modification of Eggman's Mobile surrounded with a ring of seven orbiting drones, which prevent the player from easily landing a hit. If the player manages to hit it, one of the pods will deploy, releasing a strange, evanescent duplicate of Robotnik's machine. These copies bounce lazily along the floor and can be destroyed quite easily. 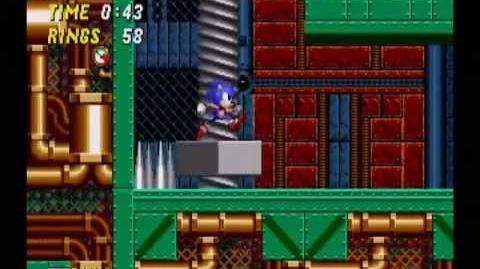