An advanced civilization gave birth to this maze-like city of broad roads in its upper tiers and tight alleys below.

Metropolis Speedway is a racetrack in Sonic Free Riders.

The stage is themed as a classic cliche of the Sonic Riders series' tracks having a futuristic town with floating cars; however, during the level the players enter a darker side of the area, then later into a city bearing a resemblance to Spagonia from Sonic Unleashed.

The course starts out with a trick ramp but different routes are taken if the racer is as far left/right as possible. The left and right positions; should the racer perform a trick, will be escorted to an overhead passage with a series of trick ramps to perform or otherwise be dropped back to the main path. The main path will be divided into three separate paths with catch-mode sections on either side and later on grind, air ride and power skill section shortcuts. Later on, a trick ramp launches the racer either on top of a train passing by or underneath it. If the racer took the upper shortcut, he/she may either try to ride on top of the train (which it is possible to drop down to the lower path or take an alternate route holding on to a metal bar attached underneath a second train given that the player holding out his/her hands upwards. If the racer took the lower route, he/she will still be able to take a shortcut by holding upwards to a metal bar attached underneath the main train. However this lower path will lead to power, grind and air ride skill shortcuts (in order of appearance) throughout the dark alley section or sharp turns with the help of quarter-pipe ramps. The upper shortcut can quickly lead the racer to the near end of the start/finish if he/she succeeded accessing the two catch-mode shortcuts that follow after mounting off the train. Following those routes should lead the racer to a trick ramp, out into the main city area path that leads to the start/finish.

This course starts a short distance before the Kicker leading to the trains in the Standard course, but instead the player will ride above or below a skylight leading to a sideways portion of a building. Then there is a Kicker that launches the player to the bottom of a vertical stretch up a building, and a jump at the top leading back down and into the dark alley section. The player follows a loop out at the end of the dark alley, then the track is essentially similar to the beginning of the Standard course from here until the finish. 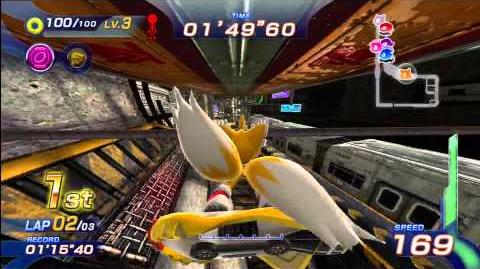 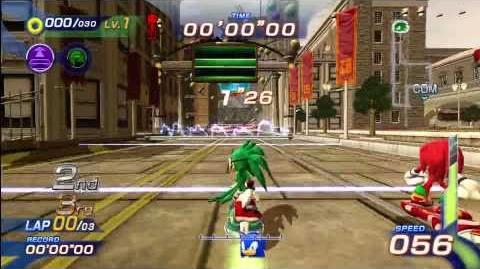