Kick up sparks to light the darkened halls of this defunct factory!

MeteorTech Sparkworks is the fourth course of the Babylon Story in Sonic Riders: Zero Gravity. It is located inside the factory of MeteorTech in Monopole.

In the Babylon Story, Amy Rose encounters Storm the Albatross who is determined to pilfer the Ark of the Cosmos she has in her possession. In an attempt to escape from Storm, Amy unleashes a strong wallop from her Piko Piko Hammer onto Storm's head and makes her escape while the dazed Storm trudges slowly after her.

This level is characterized by blaring alarms, large gears and machinery, and the MeteorTech robots flying through and aligned throughout the stage. Contrary to its mirror stage, MeteorTech Premises, the lights in the factory are defunct and require "sparkworks" to become functional. These sparks are carried through electrical ramps that can be channeled through the racers, and after performing a trick off of these ramps, the current from the ramps will channel themselves into the lighting of factory. 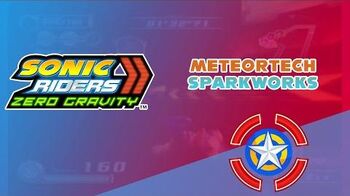