A metallic, operational factory of MeteorTech owned by Dr. Eggman.

The mother computer has set this robot factory to eliminate all intruders!

MeteorTech Premises is a course in the Heroes story of Sonic Riders: Zero Gravity. It is a robot factory located inside the premise of the MeteorTech company in Monopole. It is where Knuckles must race against Wave and six SCR-GPs.

After reaching MeteorTech Premises, Sonic, Tails, Knuckles and Amy spot a mass production of SCR-GP. Suddenly, they start to mobilize and Team Sonic believes they were spotted, but it turns out the units saw the Babylon Rogues. It was then revealed that the Babylon Rouges had one of the Ark of the Cosmos. Jet then states that Amy stole one of their Arks of the Cosmos, much to Amy's confusion. Sonic then states that "girls hate guys who rush them" and Jet once again proclaims that he's the fastest thing in the entire universe. But then an alarm goes off, and the two teams (excluding Amy and Storm) race to the main office, only to find Eggman as the head of the company.

After the starting line, there is a curve to the left leading towards a trick ramp. Depending on how well the character performed the trick he/she will race at an upper or lower path. The upper path consists of a grind section while the lower path consists of an air ride section and later on a shortcut that requires Attack. 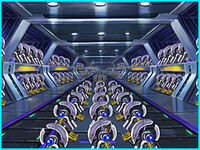 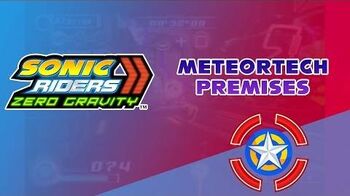