This article is about the Zone in Sonic Mania. For the Round in Sonic the Hedgehog CD, see Metallic Madness.

The Zone is a metallic and deathtrap-ridden factory on Little Planet that belongs to Dr. Eggman. As with most other Zones in Sonic Mania and Sonic Mania Plus, Metallic Madness Zone is composed of two Acts, with a boss fight at the end of both.

Metallic Madness Zone is a huge metallic stronghold owned by Dr. Eggman. The Zone borrows many parts from the original Round from Sonic the Hedgehog CD. The platforms are made of green metal and decorated with many silver machines and plaques bearing Eggman's face. All of Metallic Madness Zone is also highly protected by many death traps and Badnks, such as buzz saws, blades and cages.

Metallic Madness Zone Act 1 looks very similar to the past of the original Metallic Madness Zone 1. The base is still under construction, with the background showing many construction machines underneath a light blue sky. From what can be seen outside of the base through holes in the base's done, there are also many gigantic machines at both the top and bottom of the Act, some of which are uncomplete and possess hanging wires.

In Encore Mode, Metallic Madness Zone has undergone a color palette change. Most of the metal now has a dull orange color scheme, bearing a striking resemblance to the bad future of the original Round. The sky in Act 1 is as well tinted pink, while the inside of the stronghold is colored purple and has green lights instead of purple ones. The machinery at the bottom of the Act is also red-colored instead of gray.

During their mission to reclaim the Phantom Ruby from Dr. Eggman, Sonic, Tails and Knuckles have returned to Little Planet, which has become Eggman's base of operations. As they pass through Metallic Madness Zone, the trio overcome Eggman's traps and devious contraptions one after another. The doctor tries to stop the heroes in their tracks with the Gachapandora machine, although he is quickly bested by the heroes. As Eggman makes his escape, all power in the factory shuts off. With Sonic and his gang proceeding forward, they approach an exit in the back end of the factory, as lightning illuminates the path to a Zone containing Eggman's biggest robotic creation yet.

Having arrived on Little Planet once more, Sonic, Tails, Knuckles, Mighty and Ray resume their mission to retrieve the Phantom Ruby from Dr. Eggman before it is too late. Along the way through the Zone, the heroes are attacked by Eggman and his contraptions again and again. During each encounter with Eggman in particular, they manage to defeat the doctor, only for Eggman to escape each time. Eventually though, Sonic's crew manage to shut off the power to the factory once again and find themselves on the doorstep to Eggman's headquarters - the rebuilt Titanic Monarch Zone.

The gameplay in Metallic Madness Zone is the same as the original Metallic Madness, being rife with giant buzz-saws, steep bank platforms, crushers, passages that close off behind the player, and other sharp-edged objects ideal for harming the player. Each Act also introduces both old and new gimmicks.

In Act 1, there is an exclusive new gimmick that lets the player do a plane switching. By utilizing red and blue seesaws (based on the ones from Sonic the Hedgehog CD), the player can catapult themselves into a second layer of Zone geometry in the background, granting them extra platforming segments. To return to the foreground, the player must use another seesaw.

Act 2 reintroduces the original Metallic Madness's Flywheel gimmick, moving Springs, spinning poles with interchangeable blades that move along the ground, and plane-switching metal curtain puzzles (which allow the player to be slightly behind the foreground as opposed to far away from it). Another returning gimmick exclusive to Act 2 are the shrink rays, which are put to more prominently use here than in the original Metallic Madness to match the level layout.

Metallic Madness Zone Act 1 takes place in an under construction section of the stronghold. Similar to the original Metallic Madness Zone 1, the upper paths usually serve as the quickest and most open ones, with many paths that can lead to the lower sections, which are usually slower and make more use of platforming. Returning sections are the diagonal Springs from the original Round that send the player flying to the left, which most of the time serve as obstacles. Perhaps the most notable new feature here is the ability to move through two different layers of the Act by using seesaw-like gimmicks. These sections are usually short, although they can lead to different paths.

In Encore Mode, Metallic Madness Zone Act 1 remains mostly the same, except that a few new paths are added, and spikes and saws are much more prominent than before, specially in the closed paths, making the Act more difficult than in Mania Mode.

In Encore Mode, the Act is mostly unchanged, except that a few obstacles and secrets have been added. Like in Act 1, saws are more frequent than in Mania Mode, making exploration more difficult.

The boss of Metallic Madness Zone Act is the Egg Pistons mk.II, an updated version of the Egg Crusher from the original Sonic the Hedgehog. Eggman will stand inside one of five crushing pistons, and the player must strike the piston housing Eggman as they protrude. Between these phases, four energy balls will close in around the protagonist before the pistons once again resume. Hit Eggman four times and the pistons will change to a more erratic pattern. The player will also not have to contend with the energy balls in this phase. Hit Eggman another four times, and this boss will be defeated.

The boss of Metallic Madness Zone Act 2 is the Gachapandora, a mobile Gashapon machine. When entering the arena for this boss, the player will be miniaturized. To defeat him, the player must spin the crank on the Gachapandora to dispense a miniaturized version of either the Egg Drillster or Egg Scorcher, as well as Amy Dolls. After the Gachapandora has dispensed eight "prizes", Eggman flies away. The player must then defeat any remaining "prizes" to make Eggman descend once more. In this final phase, Eggman shoots projectiles at the player in his broken Gachapandora. One more turn of the dial will cause Eggman himself to be dispensed from the machine, ending the battle. 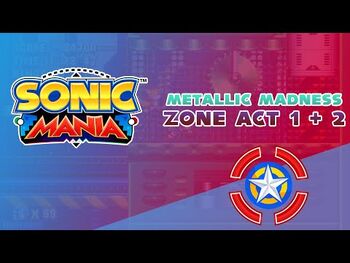