Not to be confused with Metal Madness or Metallic Madness Zone.

Sonic in Metallic Madness, from the 2011 remaster of Sonic the Hedgehog CD.

Little Planet, near Tidal Tempest and the Wacky Workbench

Evil Dr. Robotnik has created a nightmare of pumping pistons, walls of spikes and blade-wielding badniks out to slice and dice you. It'll take all your speed and skill to get through this stage. But once you do, it's time for the final showdown! The future is up to you....

Metallic Madness (金属の狂気[2], Kinzoku no kyōki?) is the seventh and final Round in Sonic the Hedgehog CD. It is Dr. Robotnik's base located on Little Planet. The concentration of all of Robotnik's intellect, Metallic Madness is a giant mechanism filled with death traps.[2] As with the other Rounds in the game, Metallic Madness consists of two Zones and a third, shorter Zone that features the Round's boss.

In the present, Metallic Madness is a green-tinted, factory owned by Dr. Robotnik. The floor has built-in turbines. In addition, some small plaques with Robotnik's face adorn the buildings. In Zone 1, the factory is full of green and red turbines. In Zone 2 on the other hand, Metallic Madness features gigantic machines that can be seen in the background.

In the past, Metallic Madness is under construction, though many of the machines and computers appear intact and functional with a lavender hue. Building girders are strewn about the ceilings and floors in many areas, construction cones can be seen on the ground and the metal shines with a soft, light purple hue. Many parts of the Round also appear either absent or unfinished, with many elements having been replaced with floating blocks in some places. In Zone 1, most of the local factory appears unfinished as well, revealing some hanging wires, a magenta sky with orange clouds, and many construction machines in the background. In Zone 2, Metallic Madness takes place fully outside, with the gigantic machines from the present having been replaced with more construction machines that can be spotted under a light blue sky with white clouds.

In the bad future, Metallic Madness appears foreboding and in a state of great decay, as if it has been abandoned for years. The machinery and surrounding walls and flooring have a rusted brownish-green hue to them, with a pitch black background illuminated with multicolored mechanical pillars and countless computer consoles. Though functional, many of the surrounding mechanisms, if not the entire place itself, appears cracked, broken, and desperately holding on to whatever electrical power it can get, as if in danger of shutting down. Both Zones feature the same general layout as in the present, though with different color tones and broken-down machines.

In the good future, Metallic Madness has been turned into a botanic laboratory of some kind, with the metal walls and floors looking sleek and clean and with a bright blue hue. Mechanical plants and fountains adorn specific areas. Miles of forestry have sprung up all around it, as if Robotnik was never there. The plaques also no longer show Robotnik's face; instead, they have been replaced with oddly-looking symbols. The place looks almost like a sprightly, futuristic laboratory where Animals dance freely and victoriously amidst the corridors. Despite the lighter feel, though, many dangerous traps are still present. In Zone 1, the turbines have been replaced with machines that feature domes with big plants inside them. In Zones 2 and 3, the Round takes place entirely outdoor, revealing a clean, light blue sky with clouds, geometric and blue-purple buildings, and small laboratories covered in miles of vegetation.

Having invaded Little Planet, which includes Metallic Madness, Dr. Robotnik would set up base in Metallic Madness and install robot teleporters in the past in order to infest the region with Badniks. Thanks to this, Robotnik managed to conquer the future of the planet and rewrite history in his own image. As such, in the future, Metallic Madness and Robotnik's base would turn into a cold and rusty abandoned base, albeit with all of its machines working properly.

After Sonic the Hedgehog arrives in the region, he manages to re-write Metallic Madness's history and revert Robotnik's effects in the region. Unlike many other things Robotnik had done to the planet however, Metallic Madness is not removed from existence due to Sonic's meddling; instead, a remodel would take over the base, turning it into some kind of botanic laboratory. Traveling into the complex Sonic faces Robotnik in a final showdown. In the end, Sonic wins, thereby triggering a chain reaction that causes Robotnik's entire base to crumple, thus forcing Sonic to escape Little Planet with Amy Rose.

The floor in Metallic Madness has built-in turbines, so the playable character must watch out for death traps such as moving buzz-saws, cages with spinning bars, and spinning blades on wheels.

There are also Springs on moving wheels, which can make it tricky to reach higher places. Towards the end of Zone 2, Sonic gets shrunk down to a quarter of his original size upon passing through a shrink ray, allowing him to fit into smaller passages and jump higher. At the end of the shrinking mini-maze, Sonic returns to his normal size.

While there are several routes throughout this Zone, the most straightforward routes start out at the beginning. There, the player will find two crush blocks that move up and down, sandwiched by a yellow Spring. By the time the player steps on top of the second crusher, they can jump up to the ledges on the left in order to reach a red Spring. Once the playable character has been launched away by the red Spring, the player will find various gimmicks along their subsequent course, including Conveyor Belts and Flywheels. From there, the player has two route options: they can either work their way up to the top, where they can find a Past Time Warp sign, or continue to the right.

The boss of Metallic Madness is the Egg Spinner, which is Dr. Robotnik in a sphere-shaped vehicle with four blades. Robotnik will use these blades in a creative variety of attacks, with this including bouncing them, throwing them against the playable character, and extending them out from the machine's body. However, most of these attacks will leave the vehicle vulnerable, where the player should attack using a Spin Attack against it. One hit will tear apart one blade, so four hits are enough to destroy the vehicle. 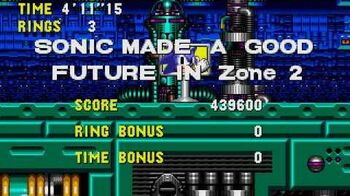