Metal Sonic (メタルソニック, Metaru Sonikku?) is a boss encountered in both the console/PC version and Nintendo 3DS version of Sonic Generations and is the overall first boss of the game.

Metal Sonic, from the console/PC version of Sonic Generations.

A run over the highways of Stardust Speedway while being chased and attacked by Metal Sonic. To win, the player has to hit Metal Sonic four times.

I WILL BATTLE YOU AS MANY TIMES AS IT IS NECESSARY.

Metal Sonic is the first rival boss in the console/PC version of Sonic Generations, and the game's overall first boss. He is fought with Classic Sonic and can be found in the Classic Era section of White Space after completing Sky Sanctuary.

The boss battle takes place on an infinite stretch of road in the bad future of Stardust Speedway.

The stage begins with a cutscene, in which Classic Sonic is shown running through Stardust Speedway until Metal Sonic destroys the road. Sonic then uses the falling debris to get back up, along with jumping on top of Metal Sonic. Metal Sonic recovers from the blow and attempts to hit Sonic, but misses. After that, the two begin to battle.

The entire fight is a high-speed chase in 2D, with Metal Sonic flying overhead, attacking Sonic. During the battle, the player will be constantly running to the right, though they can control their speed by pressing the left or right buttons. Metal Sonic has a variety of attacks, including the Ring Spark Field, flying into the foreground to snap off street lights to fall on the player, and the V. Maximum Overdrive Attack. After attacking, Metal Sonic becomes vulnerable for a short amount of time, allowing the player to counterattack with a Spin Jump.

Metal Sonic starts the fight by lunging forward at Sonic, forcing the player to jump out of the way. After being attacked, Metal Sonic will perform a Ring Spark Field attack where he generates a huge amount of electricity around and directly underneath him that Sonic must avoid or attack while he's charging it. Metal Sonic's next attack involves snapping off street lights to throw directly at Sonic; the player must avoid these by watching the shadows of the streetlights on the road. Finally, Metal Sonic will attack with a powered up version of his first attack, which can avoided by jumping up on higher platforms. It takes a total of four hits to defeat Metal Sonic on Normal and Hard mode. Once Metal Sonic is given the final blow, there is a brief cutscene of Sonic kicking Metal Sonic away, who proceeds to explode.

In Hard Mode, Metal Sonic is much faster, making it harder to avoid his attacks. The order of his attacks also changes; he snaps a total of five street lights at Classic Sonic before performing his Electric Shield attack, as opposed to two in Normal Mode. 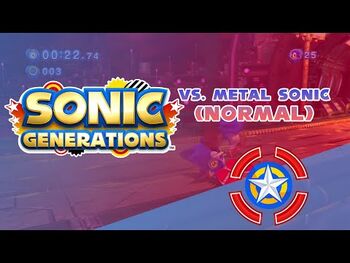 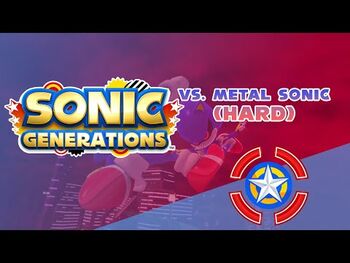 Metal Sonic, from the Nintendo 3DS version of Sonic Generations.

A race against Metal Sonic in Casino Night.

Metal Sonic is the first rival boss in the Nintendo 3DS version of Sonic Generations, and the game's overall first boss. He is fought with Classic Sonic within the Classic Era section of White Space after completing Mushroom Hill.

The boss battle takes place on a finite racing course in Casino Night.

During the race, Metal Sonic does not seek every shortcut along the racing course in case the player is not ahead of him or has used them. The player can also attack him with a Spin Attack to slow him down.