A high-speed chase after Meta Sonic. Here, the player controls all of Team Sonic. To win, keep knocking blue orbs back at him.

Metal Sonic is the boss of Slowpoke Isle and the fourth boss of Sonic Boom: Rise of Lyric. He is encountered after clearing Slowpoke Isle, and is fought with all of Team Sonic.

Metal Sonic appears at the end of Slowpoke Isle. The player must defeat him to get the Verdant Crystal back. The skirmish takes place on a speed section with looping roads and is divided into three phases. On the route, the player must watch out for obstacles in addition to Metal Sonic's attacks. Along the road, the player can also pass through turquoise fields in order to make strings of Rings appear.

During the first phase, Team Sonic will run around on their looping road. While there, Metal Sonic will only utilize two attacks. The first of these attacks involve him floating in front of Team Sonic from time to time while throwing three mechanical balls at the playable characters one by one. However, these balls can be knocked back into him by performing an attack while running. Getting hit by these balls will in turn damage Metal Sonic. These mechanical balls can also be found scattered along the speed section's route, which can also be knocked into Metal Sonic with an attack. The second attack Metal Sonic can utilize in this phase is his laser. After a few seconds of charging, Metal Sonic will fire his laser into the track, thereby creating damage-inflicting debris that the player must jump over.

After receiving enough hits with the balls, Metal Sonic will destroy a section of the road and send Team Sonic flying up to another looped speed section, thereby initiating the second phase of the fight. Here, Metal Sonic gains two new attacks. The first of these attacks has him plow along the road, thereby creating a red-hot trail of damage-inflicting debris behind him. Worth noting is that Metal Sonic will adjust the lane on which he creates this debris in accordance to the playable characters' movements, so it is advisable to lure him away by changing lanes. The second attack he gains in this phase is a new laser attack where he flies ahead of the road and changes his laser for a few seconds before shooting the road in order to create damage-inducing deris. The only way to dodge this attack is by jumping over it.

After receiving enough hits with the balls, Metal Sonic will destroy another section of the road and send Team Sonic flying up to another looped speed section, thereby initiating the final phase of the fight. Here, Metal Sonic uses all the attacks he has gained over the course of the fight, along with a new one. This attack involves him appearing behind the leading character and then charging straight into them. In addition, Metal Sonic will leave a blazing red trail in his wake that will damage the characters if they touch it. The best way to avoid this attack is to change lanes when Metal Sonic starts his charge and remain there until his trail dissipates. After then hitting him enough hits with the balls in this phase, Metal Sonic is defeated and Team Sonic will obtain the Verdant Crystal. 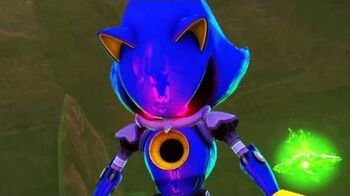