A race against Metal Sonic which is based on the original in Sonic the Hedgehog CD.

Metal Sonic once again challenges Sonic (along with Tails) to a race. Unlike the original, the race is on much more even ground. However there are several sections where doors will fall down, obstructing the pathway, these doors can be destroyed with use of the Homing Attack with three hits, or the Rolling Combo with one hit (note that Super Sonic destroys the doors in one hit with any attack). Metal Sonic is also lacking the abilities he had in the original race, relying solely of his speed to outrun Sonic.

As with the original race, the end contains a door (although this time it is electrified), if the player loses the race, Metal Sonic will run through the door before it closes, causing Sonic and Tails to crash into the door, losing the player a life. If the player wins, Sonic and Tails will run through the door before it closes, causing Metal Sonic to crash into it, defeated once again. It should be noted that if one uses the Rolling Combo or Super Sonic right from the start of the race, Metal Sonic is easily surpassed and any obstacles are instantly destroyed in one hit, thus one can use this trick to safely win the race if it proves difficult. 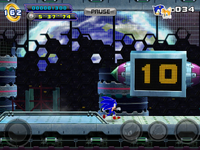