See me as I am, no longer afraid of anything! I shall become the ultimate overlord, ruling as the world's most supreme being!

Metal Overlord's physical appearance is nearly identical to that of Metal Madness, meaning he resembles a large, blue, heavily-armed mechanical dragon, with two eyes lined up vertically on his head. He has several long spikes on his upper body and many smaller ones running down his back and his long, curved tail. He has a flamethrower as his right hand (though he is not seen using it), and his left hand has four fingers with claws that can be launched, but he has no legs. The only physical difference between Metal Overlord and Metal Madness is that he has grown a pair of mechanical wings on his lower body and detaches himself from the fleet, leaving several cables hanging from the bottom of his body.

When deciding to take the matter of defeating his rival Sonic and conquering the world into his own hands, Metal Sonic had the idea of becoming Metal Overlord, a form with the power necessary for both tasks. To achieve this form, Metal Sonic needed data from sufficiently strong people, and as such lured Team Sonic to the Egg Fleet to distract Sonic for good while he would copy the team's data along the way. Additionally, he needed Chaos' data and kidnapped Froggy and Chocola. When Team Dark, Team Rose and Team Chaotix joined the adventure, Metal Sonic copied their data as well.

After getting the data he needed, Neo Metal Sonic transformed into the early stage of Metal Overlord, Metal Madness, by using debris from the Final Fortress. Despite interference from Team Rose, Team Dark and Team Chaotix, Metal Madness completed his transformation and finally became Metal Overlord. Metal Overlord then flew into the skies, intending to make his ambitions reality, but was pursued by a super transformed Team Sonic. Confident, however, that even Super Sonic was no match for him, Metal Overlord fought the team without hesitation. During the battle, Metal Overlord ranted about his intention to rule over a robotic kingdom and his belief that the real Sonic was his copy. Eventually though, Metal Overlord was defeated and he fell down from the sky in agony, unable to understand how he could lose, before landing on the Final Fortress and reverting back to Metal Sonic.

In Sonic Rivals, Metal Overlord appears on the 149th collectible card in the game.

In Sonic and the Black Knight, Metal Overlord appears among the winning fan art presented in the game.

Being Metal Sonic's strongest known transformation, Metal Overlord is one of the most powerful robots Sonic and his friends have ever faced, and probably one of the most powerful beings depicted in the entire Sonic the Hedgehog series next to Dark Gaia and Solaris. In this form, Metal Overlord is strong enough to fight on par with Super Sonic, Super Knuckles, and Super Tails and even then, the trio only had a slim chance of defeating him, if not even less.

Due to him having grown wings, Metal Overlord is capable of flight and can fly at incredible speeds, but is still slower than Super Sonic. He is also capable of enormous feats of strength, as he can easily pick up ships from the Egg Fleet with just one hand and throw them. Additionally, Metal Overlord has proven himself to be highly physically durable in this form, nearing that of invincibility. Normal attacks from even super transformed characters cannot hurt him, and he does not appear to have any weak points in this form. The only known attack strong enough to inflict damage on him is Team Sonic's Team Blast, Super Sonic Power.

Metal Overlord can fire rapid barrages of crystal pillars and launch the spikes on his back as homing missiles, much like in his previous form. This time around, however, he can fire them at a much faster rate. He can also fire his left claws as missiles that can trap his target in a crystal cage which is strong enough to hold even a Super State user.

Metal Overlord can also perform Chaos Control, possibly due to him copying Shadow the Hedgehog’s and Sonic the Hedgehog's data, which allows him to freeze time temporarily. It is unknown if he can perform it for longer periods of time, or if he has the skills to further manipulate time and space.

Metal Overlord seen in the battle.

The second phase of the final boss that is set in a dark cloudy storm, where the player has to gain enough charge to use Team Blast five times and defeat the Metal Overlord.

Metal Overlord is the final boss of the Last story of Sonic Heroes, and the final overall boss of the game. He can be fought directly after defeating Metal Madness, and is fought with Team Sonic.

Metal Overlord is fought in the Last Story as the final boss of Sonic Heroes. He attacks by shooting out crystal pillars, which Super Sonic can destroy with Homing Attack, Rocket Accel, Tornado Jump, or Light Attack (the Light Attack will consume five rings when used, and as such, is not recommended), shooting out missiles that can trap the player's teammates (which Tails can Thunder Shoot for Team Blast charge), and by throwing large ships at the player, which can be destroyed by Knuckles (done by using his Fire Combination to create fireballs and directing them at the craft which also fills the Team Blast Gauge), though the player can simply maneuver around the craft instead. Should the player stall too long, he will use Chaos Control to freeze time for twenty seconds and gain some time to launch a counterattack. Rings are still consumed while it is in effect, and can be countered using Team Blast. The player should keep repeating this pattern to fill up and use the Team Blast, Super Sonic Power, which is the only way to damage Metal Overlord. After five Team Blasts, Metal Overlord will be defeated.

To acquire an A Rank for this boss battle, the player must finish it in under seven minutes (note that the time spent on battling Metal Madness with the other three teams is carried over to the Metal Overlord fight). 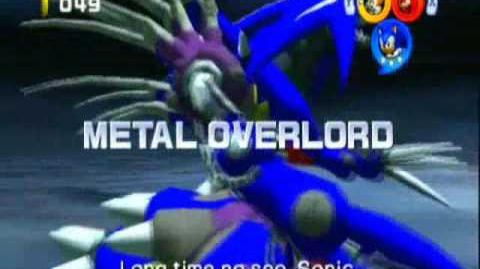 In the Sonic the Hedgehog comic series and its spin-offs published by Archie Comics, Metal Overlord is mentioned several times, although he has yet to make an appearance. He first surfaced in the reality created by the second Genesis Wave where his history was identical to his game counterpart. After the universe was rebooted by the Super Genesis Wave, Metal Overlord became a part of the main timeline, although his history remained the same as his game counterpart.

"Sonic... I was created for the sole purpose of destroying you. But I could never seem to defeat you! That's why I transformed my own body with my own hands."
—Metal Overlord explaining his transformation, Sonic Heroes

"But that was the past, now you're nothing but a speck of dust to me!"
—Metal Overlord's response to Super Sonic's taunts, Sonic Heroes

"I am the ultimate overlord, Metal Sonic! I am the real Sonic!"
—Metal Overlord after being defeated, Sonic Heroes 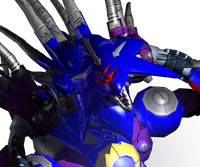