You're all useless now that I've copied all your data.

Metal Madness (メタルマッドネス, Metaru Maddonesu?) is the transformed version of Neo Metal Sonic and the penultimate boss of Sonic Heroes. By combining the collective data from Team Sonic, Team Dark, Team Rose, Team Chaotix, and Chaos, Neo Metal Sonic can rebuild himself into Metal Madness with the debris from the Final Fortress.

In this form, Neo Metal Sonic's appearance is that of a large, blue, heavily-armed mechanical dragon, with two eyes lined up vertically on his head. He has several long spikes on his upper body and many smaller ones running down his back and his long, curved tail. He has a flamethrower as his right hand, and his left hand has four fingers with claws that can be launched. He has no legs in this form. Instead, his lower body is attached to the Final Fortress with several thick cables.

In order to beat his arch-rival Sonic the Hedgehog and eventually claim world domination himself, Metal Sonic sought to become strong enough to achieve his ambitions. To this end, he staged Team Sonic's, and later Team Rose, Team Dark, and Team Chaotix's adventures in Sonic Heroes so he could collect both theirs and Chaos' data in order to become Metal Overlord, his most powerful form to date. In order to reach this form, Metal Madness proved to be a necessary step during this transformation.

At the beginning of the Last Story plot line in Sonic Heroes, Neo Metal Sonic reveals himself to Team Sonic, Team Dark, Team Rose and later Team Chaotix, and announces himself as their new ruler before shooting a lightning bolt into the sky. The lightning bolt soon comes back down and blows up the command tower upon which Neo Metal Sonic stands on. By then manipulating the debris from the tower, Neo Metal Sonic constructs Metal Overlord's main body and then merges himself with it, becoming Metal Madness while roaring in triumph.

As strong as Metal Madness proved himself to be, however, his transformation into Metal Overlord was still not complete, and he needed time to finish his transformation. In the process, he found himself being attacked by Team Rose, Team Chaotix and Team Dark, who were trying to buy Team Sonic enough time to perform a super transformation with the seven Chaos Emeralds. Though the teams managed to put up a good fight, Metal Madness remained unconcerned and dismissed their attempts to stop him.

In the end, Metal Madness proved himself too tough for the three teams to defeat, and he managed to complete his transformation, thus becoming Metal Overlord. He then took off from the Final Fortress, but was shortly after pursued by a super transformed Team Sonic and was defeated.

In Sonic Rivals, Metal Madness appears as the 148th collectible card in the game.

Despite being an incomplete transformation and having his movements hindered due to being attached to Dr. Eggman's fleet, Metal Madness is a very powerful figure. His might proved great enough to take on Team Rose, Team Chaotix and Team Dark at the same time, and while all the teams worked together, they could only slow him down. Dr. Eggman even stated that even with the seven Chaos Emeralds, they only had a slim chance of victory.

Metal Madness is able to launch the spines on his back as missiles that can track the opponent, and when they hit the ground, they will sprout into indestructible sharp spike formations which will shatter automatically after some time. He can use his right hand to produce a powerful and large column of fire, and his left hand can shoot his claws as missiles which can trap his enemies in crystal cages (His claws will automatically regenerate). Possessing a tail, he can use it to land wide swipes over a large area. While he is also nearly invulnerable to harm, his weak spots in this form are the glowing markers on the left, right and front side of his lower body, which is only vulnerable to the right formation types.

The penultimate boss split in three parts, in which Team Rose, Team Chaotix and Team Dark fight against the Metal Madness. In each phase, Metal Madness has 100 HP.

The boss battle with Metal Madness is fought in three phases. One for Team Rose, one for Team Chaotix, and one for Team Dark. The battle will take place on a platform for each team with a little distance to Metal Madness. During the battle, Metal Madness can only be damaged with the right formation type indicated by the color of Metal Madness's weak spot, which changes after a couple of hits. The weak spot's color lights up as blue, yellow or red which indicates that it is immune to incoming attacks from Speed, Fly or Power formations respectively.

On each phase, Metal Madness has 100 HP, which must be reduced to zero in order to proceed. Each time a phase is cleared, all Rings and Team Blast Gauge energy the player has collected are passed onto the next team (except Team Dark). On the other hand, each team keeps their own life count from their respective playthroughs.

You're the one pretending to be Sonic! You're the one responsible for taking Froggy and Chocola!
I can't believe you would do such a thing!!!
You're going to pay for this!
I'll tear you to pieces!

The battle commences with Team Rose, to the right side of Metal Madness. Their platform has two Containers, each with a Team Blast Ring Item Box and has sixteen Rings spread around. In this round, Metal Madness can attack in three ways; He will use his flamethrower across the platform, which can be jumped over. The second one is a wide sweep with his tail which can also be jumped over. The final attack is where he launches his spines towards the team, wherever it might be. If they hit the ground they’ll sprout into spike formations which causes damage upon contact. In this phase, Metal Madness is always immune to Speed type attacks, which means that Amy is completely useless against him, and only Big and Cream are useful in the battle.

Here, the player must get as far away from Metal Madness as possible and let the spikes sprout where they cannot get in the way while avoiding them. During their battle, it is best to attack him with Big for maximum damage. One of the first things the player should do is to pick up one of the two Team Blast Rings (which gives an instant Team Blast) and use it as close to Metal Madness as possible. The player should then either take the second one and repeat the process or save it for the next team. After this, the player must keep attacking him with Big and the round with Team Rose will be complete.

Transformation isn't quite complete yet.
Incomplete freak!
Now's the time to strike!!
You're all useless now that I've copied all your data!

The next phase of the battle is played by Team Chaotix, to the left side of Metal Madness. Their platform contains sixteen rings, a cannon which can be used to reach Item Box Balloons, each containing a Power Core if the right formation is used. Here, Metal Madness will repeat his spine attack and tail sweep which can be countered in the same way as before. He has a new third attack where he launches his finger missiles which can trap team members in crystal cages if they hit, rendering that member unusable, but they can be broken if attacked repeatedly. If all team members are caught, however, the player will lose a life. The best way to counter it is either to switch to Flight formation and remain airborne, or hide inside the cannon until he is done. The first priority for the player should be picking up the Power Cores in the balloons so they can deal acceptable damage. In this round, Metal Madness’ marker will change between red and yellow, so under these conditions, it would be best to attack with a combination of Flight and Power formations; the player should use Flight formation when Power cannot be used and vice-versa until Metal Madness makes a move and when possible, use Power formation to deal massive damage. The player should repeat this and the round with Team Chaotix will be complete.

A longer, but safer method is to use Espio's Leaf Swirl to become invisible and then throw shurikens at Metal Madness as he does not change his weak spot to blue, nor he can aim directly at Espio.

So you're the one behind all of this, huh?
Consuming power of others at your own will...and that's supposed to make you tough?!
New target acquisition! Sights locked on Metal Sonic!
Even the ultimate life form can't stop me!

The final phase of the fight is played by Team Dark, in front of Metal Madness. Their platform has only four Rings, Power Cores in the crates to the left and the right side of the platform and in the balloons above them. In this round, Metal Madness will attack with his flamethrower, finger missiles and spine attack, which still can be countered in the same manner as before but now Shadow can destroy the spine pillars using Black Tornado. The first priority for the player is to pick up the Power Cores for maximum damage. Metal Madness' marker now changes with all three formation colors (in the sequence of blue, yellow, red, blue etc.). The player must proceed with a combination of Power and Flight formation attacks in order to deal maximum damage in a short amount of time. If this pattern is kept, Team Dark’s round with Metal Madness will be over quickly. 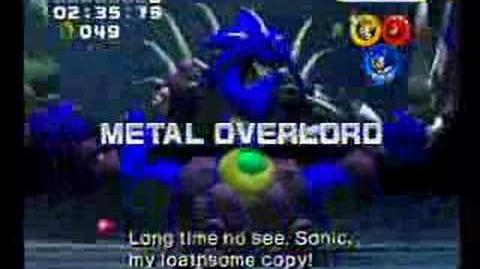 "You're all useless now that I've copied your data!"
—Metal Madness, Sonic Heroes

"Burn. To. Death."
—Metal Madness while attacking with his flamethrower, Sonic Heroes

"I’ll skewer you!"
—Metal Madness when preparing to use his spike missiles, Sonic Heroes

"How appropriate to have a robot overlord rule a robot kingdom!"
—Metal Madness after battling Team Dark, Sonic Heroes