For the later robotic version of Knuckles, see Mecha Knuckles.

Metal Knuckles[2] (メタルナックルズ, Metaru Nakkuruzu?) is a character that appears in the Sonic the Hedgehog series. It is a robot created by Dr. Robotnik in the image of Knuckles the Echidna. It was used during the World Grand Prix incident to counter Knuckles' participation.[2]

Metal Knuckles was created in the image of Knuckles the Echidna and is thus mostly built of red metal. It possesses an semi-flat and round head with a medium-long metallic gray muzzle and a pointy gray nose on the tip. It also has green eyes with black sclerae and pupils, and five long strips of gray-tipped red metal extending downward from the sides and back of its head which are meant to resemble Knuckles' dreadlocks. Metal Knuckles possesses as well a red ellipsoid torso with a white crescent mark on its chest and a rocket exhaust on its rear. Meanwhile, its arms consist of gray upper arms and red forearms resembling long and thick paws with two gray and sharp claws for fingers and yellow circles on the back of its paws. Metal Knuckles similarly has gray tights and red lower legs. Lastly, it has two feet resembling Knuckles' shoes, complete with a red color scheme, green cuffs, yellow stripes across the middle, black soles, and bolted gray plates on top of its feet.

In Sonic R, Metal Knuckles was a secret weapon manufactured by Dr. Robotnik to overcome Knuckles the Echidna with in case Knuckles would prove to be a hindrance, having anticipated Knuckles's participation in the World Grand Prix, which Robotnik had tricked Sonic the Hedgehog into participating in to help him find the Chaos Emeralds.[2][3] The plan was then for Metal Knuckles, along with Robotnik and his other minions, to join the World Grand Prix as participants and be ready to attack Sonic and claim the Chaos Emeralds from him when the time was right.[3]

In the end however, Sonic and his allies secured the Chaos Emeralds without Metal Knuckles and the others getting their hands on them.

Metal Knuckles has displayed little to no personality of its own. However, it does possess a degree of autonomy, like being capable of posing victoriously after a winning a race.

Possessing the same power plant as Metal Sonic, Metal Knuckles possesses high speed and acceleration power.[2] This allows it to move at super speeds, enough to compete in the World Grand Prix. Like Knuckles, Metal Knuckles is also capable of gliding through midair for a limited time.

A similar character appeared in Fleetway Editions' Sonic the Comic, as a new version of Metallix that was loyal only to Robotnik. It made its debut capturing Sonic for the Drakon Empire[4] and then acting as a Prosecutor in Sonic's trial-by-combat. It came very close to killing him, but Tails managed to destroy it by sheer luck. The Metallix was only reused once, as Grimer used it to defeat Sonic so he could discover from him what happened to Robotnik; he then faked things so Sonic would not remember this and instead think he beat Metallix. In its three clashes with Sonic, the Knuckles Metallix has never been defeated. It was once shown that Robotnik had a whole army of them, but they were never shown in use.

In the Sonic the Hedgehog comic series and its spin-offs published by Archie Comics, Metal Knuckles is a Badnik copy of Knuckles and a part of the Metal Series, along with Metal Sonic, Metal Tails and Mecha Sally. He was created to help enforce the Dark Egg Legion, but got damaged and later possessed by the Krudzu in Albion.

In the Sonic the Hedgehog comic series and its spin-offs published by IDW Publishing, Metal Knuckles is a robot from Classic Sonic's world, created by Dr. Eggman in the image of Knuckles. 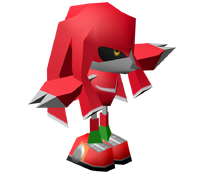